I though I might share a few photos of yesterdays walk, The Lade Braes at St Andrews.

For those of you unfamiliar, It starts in the centre of town skirting past the back of the Botanic Gardens although with the shrubs and trees in full bloom the view is extremely limited. It mixes both wooded walkway and housing with parks and fields and has plenty to see along the way.

The path extends all the way to Craigtoun Park a good 3.5 miles It’s a fairly quiet route, until reaching the Park which was good to see how busy it was since not so long ago it looked rather forlorn and neglected.

Ps I know you all sung that last part!

Best wishes
Kerry and Stephen
Posted by Quilters at Work at 10:10 No comments: 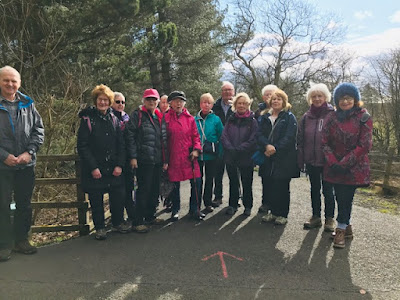 14 of us left the church at the usual time and headed of to Lochore Meadows where we were having our latest walk. Surprisingly the car park was a bit  full despite the current climate. I guess people were out because it was recommended we stay in. We are a  funny lot.
There was still 14 of us when we set of, led by Carol, who with some encouragement from Bill, was taking the walk. W e left from the new  Willie Clarke Visitor  Centre  opened in 2018 and named after the Mr. Clarke, a local councillor who was instrumental in pushing for the development of the  country park and ultimately the new Centre. He is perhaps less well known for the fact that he was the last Communist councillor in Britain. We started off around the loch in a clockwise direction, heads down as we had the benefit of a gale force wind in our faces. This part of the path also forms a short part of the Pilgrims Way although the park wouldn’t have been there when the Pilgrims came through. We were accompanied on this stretch by a little pug dog who trotted along behind us taking advantage of the shelter the group were providing. It was a bit of relief when we reached the tree line and nature reserve where we stopped for one of Mary’s sweets and a photo or two . It got a bit muddy at this point but most of us didn’t bother  much as we had plenty to talk about as usual.  After the mud came the only raised part of the walk up to Cluna Craig, but nobody needed to use our emergency oxygen. As we crossed the bridge over the river Ore we noticed a strange phenomenon (and that’s a strange word). Two little whirlpools had formed in the water above the bridge and we all stopped to have a look. If the whirlpools were strange, the sight of 14 adults looking over a bridge at whirlpools is very strange. We must be getting old. From there it was back to Communist councillor Willie Clarke’s centre for tea/coffee and various scones, pastries and cakes. It was about then the torrential rain came on. We do time things well. Much thanks to Carol and Bill. On our next walk we need to walk 6 feet apart, like a parade. No talking, just shouting.
Posted by Quilters at Work at 22:45 No comments: 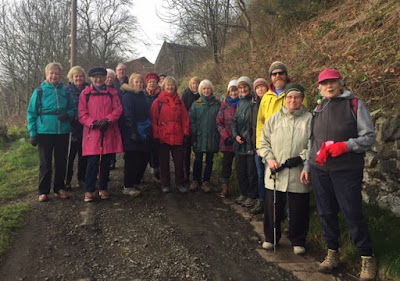 Today saw the first walk of 2020 for our walkers. It was looking promising as there were 18 of us in total, a good start to the year. The gloomy weather obviously hadn’t put anyone off, whether or not the rain would stay away was another matter.

Our cars parked at the Bay, the leisure complex attached to Pettycur Bay Caravan Park, we set off along the main road heading towards Kinghorn High Street, cars whizzing past us at speed to start the urban part of our walk. We turned left zigzagging our way along various streets commenting on the number of new houses that seemed to have sprung up recently on the outskirts of Kinghorn heading towards The Ecology Centre and Craigencalt.

Once reaching the Ecology Centre we were welcomed by a giant troll.

We headed past the Loch and unfortunately bypassed the cafe at Craigencalt since this wasn’t todays coffee stop. We were all cold by this time so a nice cuppa wouldn’t have gone amiss but we pressed on. Moving on uphill we were delighted to see the first flurry of Snowdrops. 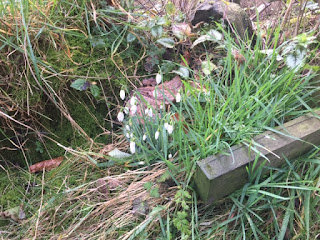 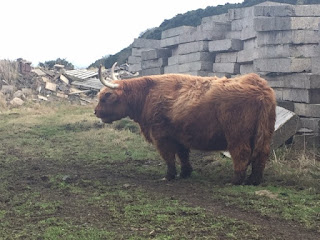 Here the Highland Cows roam freely but seemed totally unperturbed that their field had just been invaded by a new herd. It was at this point the rain appeared albeit a short shower so fortunately we didn’t get too wet. Just around the corner the last downhill stretch led us back to the Bay arriving slightly ahead of schedule leaving plenty time for tea, coffee scones and chat.

Posted by Quilters at Work at 09:37 No comments: