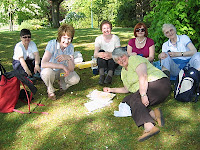 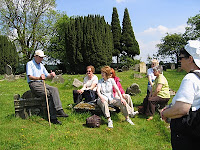 We were feeling the heat when we reached Culross so were glad that a short sharp shower came on and cooled everyone down. Using the walk in Hamish Brown's book of 25 Fife Walks we took a left out of the carpark moving west towards Kincardine. At a very bad bend we turned off onto the entrance to Dunimarle Castle. We avoided the castle though as it seemed to be a private residence, so we wandered through the trees smelling the country air and identifying the campions, wood anemones and of course the bluebells which were out in force. Emerging from the trees we were admiring the view across to the Lothians when Sandra and Winnie spotted a ruin of a church and were beckoned by an elderly gentleman offering to tell the story of the West Church. We sat around on gravestones, some of which were dated 1620, listening to Paddy tell his tale of how his interest began in the church and how he wrote a book called the 'West Kirk.' Paddy, like Morse, only had one name and as his tale became longer, delusion became apparent. He was so passionate and knowledgeable about the church and graveyard however, it was nice just to listen to him and he clearly enjoyed the audience. We loved his cap which read ' Head Gardener.' Moving on, though not at great speed, we reached the town of Culross hoping to go into the church and abbey there. We were asked for tickets at the entrance to the church - aw, there was a concert on today. And the 13th century abbey, well, there wasn't a great deal left to view given that it fell into disrepair at the time of the Reformation, although it's gardens are beautifully manicured. Heading downwards now to Tanhouse Brae where we stopped to read an inscription on Snuff Cottage (1673) - 'Wha wad ha' thocht it?' being the first line of a couplet; the second, ' Noses ha' bocht it.'is to be found on a snuffmaker's premises in Edinburgh. The Mercat Cross itself dates from 1588 but withstood all of our group standing on it to have a photo taken. Very picturesque part of this ancient town. We proceeded down Back Causeway walking on the 'croon o'causeway', the large cobbled stones set in the middle of the road where gentry used to walk. The smaller cobbles were set lower down and intended for the commoners as that was where the town's sewage flowed through the streets. It was pleasant to walk through the town but we were getting a bit peckish so made our way back to the cars and on to Dunfermline Glen. What a glorious day in the park. There were many families enjoying the sunshine, playing rounders, football, children clambering over the old steam engine and picnics and ice creams in abundance. We remarked about Andrew Carnegie's generosity to the people of Dunfermline over a hundred years ago still giving so much pleasure to all who visit. We expected to be watching/ listening to an event in the Pavilion about Pentecost but we arrived at teatime so we missed out. We had brought our own picnic though, and a birthday cake denoting the very beginning of the Christian church, which suited us nicely. There were only 7 walkers today and we weren't really moving fast enough to burn off any calories but as always we enjoyed each others company and had a good few laughs.
I do hope Hamish Brown is working on his next book cause we're running out of walks.
Posted by Quilters at Work at 10:11 No comments: