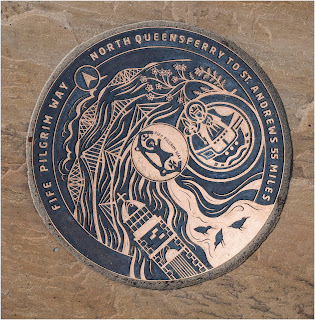 Todays walk was slightly different to our normal jaunts as we were about to commence the first few miles of the newly opened Pilgrim Way. The 64 mile walk (depending on where you start as it is billed as 55 miles from North Queensferry to St Andrews if you omit Culross) officially opened on the 5th of July so the 14 walkers about to set off in the sunshine were surely one of the first groups to be lucky enough to experience the new Fife walking route 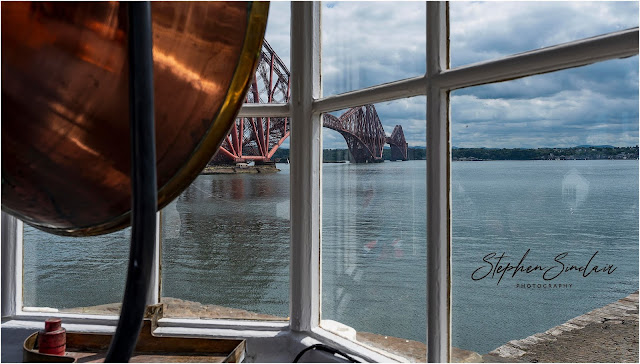 .
The walk started at the small lighthouse situated just under the Forth Rail Bridge which gave a chance for the walkers who were interested to climb the steps of the lighthouse to see the unusual view at the top. Once on our way, we stopped for our group photo enabling us to chart the start of our Pilgrims adventure. 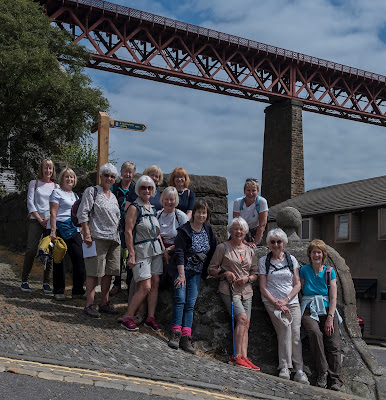 The 'Lions head Well' created a bit of a talking point as it seemed to depict a man and a woman engaged in a scuffle. On further investigation legend has it that it is actually a woman defending the wells water from a sailor. 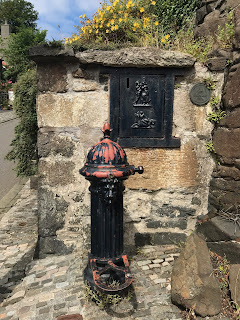 We followed the path downhill leading us in the direction of Carlingnose Point Wildlife Reserve where there was a plaque commemorating Lt George Paton of the Royal Scots Fusiliers who was killed during the First World War saving his men from a grenade thrown during a training exercise nearby. 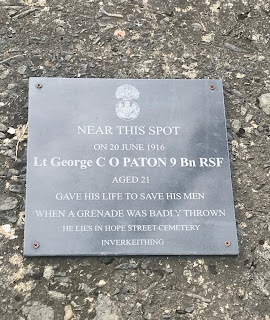 At this stage we had gorgeous views over the water and were quite envious of the owners of the houses overlooking the beach with their fantastic views. Continuing along the path we had a quick stop for a breather  (it was getting warmer by this time) at the picnic area where we were approached by other walkers alerting us to be on the lookout as Charlie was out and about with his wee dog Hamish and might be heading our way. By now we were almost at Inverkeithing with the not so scenic scrapyards ahead of us and the quarry to our left.

On reaching Inverkeithing it was time for our coffee stop. One thing that has been noted is the lack of refreshment stops on the Pilgrims Way but I'm sure the Pilgrims were not as lucky as us since we were able to pop into Greigs the bakers for our takeaway teas and cakes which we were able to sit and enjoy in the lovely gardens at the Inverkeithing Hospitium, an old Friary building now used as a community centre.

A short walk from here brought us to the station where we said our walkers prayer before the majority of the group caught the train back to Kirkcaldy and Stephen and I walked back the route we had just come taking us back to our car at North Queensferry.

A great start to our Pilgrims journey was had by all.

Posted by Quilters at Work at 10:54 No comments: