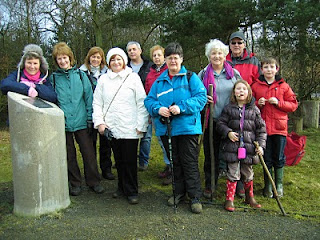 The Happy Daunderers met up at Mcdonalds car park then took a bus to Cardenden where we started our walk. Three of us set our pedometers so that we could measure the walk accurately. It was pleasant to wander through the Den and smell the country smells again, but the ground was very soft and muddy for the most part so our waterproof boots were well tested. Whatsmore, it was clear by the tracks and other evidence that the Den is used as much by horses as people and in fact we stopped to give way to a couple of beauties.
Just as we approached the A92, which we walked underneath, we noticed some graffiti;not only on the massive columns of concrete holding the road above us, but actually at the top of the bridge on the steel structure holding everything together. How on earth the graffiti artists reached there we will never know but it made us queasy to imagine. More sludge at the other side and we were getting a bit narked at the inconvenience. But the giddy limit was yet to come. Unfortunately we ended up on the road which led to the off-road motorcycle track so we were wading through deep slushy mud and I had to wonder whose idea it was to take this route today. As the road started to dry out we stopped at the plaque in the photo which shows the spot where the last duel in Scotland was fought in 1826 between David Landale, a linen merchant, and George Morgan, a bank manager, over a bank loan. Morgan was the runner -up.
Our feet were beginning to dry out as we walked back over the A92 this time towards Cardenbarns Farm, We had a nice view of the Bishop hill from there which still has a lot of snow on it but the weather with us was quite warm and sunny. Away from the traffic again and into Carden Woods, this was much more agreeable and dry underfoot. A couple of walkers had grown up in Cardenden and these woods were a playground to youngsters in those days; picnics on Blueberry Hill, man-made 'caves' out of sticks,and 'the View' which we thought was a secret place but in fact was everybody's secret. Happy memories. Mary remarked on the surface we walked on - large rounded stones into the ground which had been laid with a bit of foresight as a road a very long time ago. We moved along the edge of the woods which was a very pleasant walk. As we emerged from the woods we had a terrific view of the snow-capped lomonds and in the foreground the little hamlet of Cluny and Coalden. Back at the main road we left the Dothan Farm behind and with great care crossed the A92 for the third time today. As always, at the end of our walks we were looking forward to parking our weary bones and enjoying a cuppa which today was at the Home Farm View. Hilda, Winnie and Dianne compared the mileage on their pedometers which actually bore no similarity but settled for 4.6 miles.
Today was the last time we walked as St John's Walkers, but we were already planning the next outing so the group will most certainly be carrying on under a new name. Keep a l
Posted by Quilters at Work at 10:55 No comments: