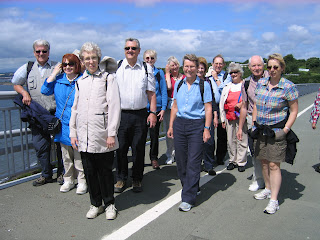 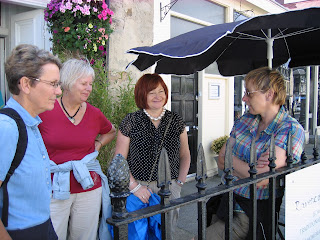 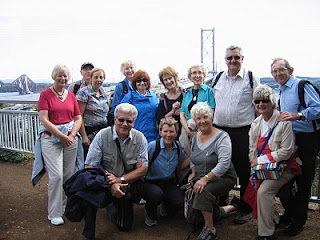 As there were 14 walkers today we decided to be environmentally friendly and take one minibus rather than 4 cars to North Queensferry. The bus worked out well other than the driver taking a wrong turning before we even got there. That aside we parked at the Queensferry Hotel and made for the bridge. Only one side was open to pedestrians today; there must have been some necessary repair work going on. So we walked both ways on the north side getting great views of Rosyth Dockyard on the Fife side and Port Edgar on the Sth Queensferry side. We had only just started walking when one of us realised she had forgotten to change from shoes to walking boots but thought it didn't matter. As you can see from the first photo everyone was fresh and smiling and the sky behind blue with fluffy clouds. No matter how lovely a day however, you always get a fair skelp of the wind on the bridge, but it didn't hinder us. We actually crossed over in under half an hour. In fact we weren't even ready for the advertised coffee and sticky bun at the Brewer's Fayre and so decided to go on a little further to South Queensferry. So we toddled off underneath the carriageways this time into the wee town which was bustling with daytrippers, holidaymakers and a wedding reception at Orocco Pier. The ladies were hoping to see the bride but alas she did not make an appearance. As we felt we wouldn't really fit in having our refreshments at Orocco Pier with the guests, Mary did a quick reconnoitre at a wee cafe opposite which turned out to be very suitable. Whatsmore, the Ravenous Beastie was a bit more than your average cafe; it's actually a restaurant offering a very good menu as well as a guest house. We had pleasant service from the young waiter/tress too which our group always comment on. It had a quaint toilet (named the Burstin' Beastie) as well - no electric light, but a candle giving only just enough light to see where one should position oneself. It was less than adequate however for the walker who was wearing her shoes, without socks, and had to stick plasters on her blisters in the half dark. Anyway, the middle photo shows the advisory committee debating the score - the establishment got a 9/10 from us. We had a photo-shoot with the Forth Bridge (the real one) in the background then began our return journey, uphill this time. As always, we quite naturally vary who we walk alongside between conversations, learning a bit more about each of us with every exchange. As you can see by the third photo, it was blawin' a gale and some folk were on their knees by the time we got back to where we started. It was fascinating how the women's hairdos were skew-whiff yet the men had not a hair out of place. Makes you wonder...
Safely back at the kirk we shared our appreciation of a fine healthy walk, great weather, our wonderful bridges and each other's company, especially our four new walkers. As always we said a short Gaelic blessing before we parted. Another good one chalked up.
Posted by Quilters at Work at 10:34 No comments: 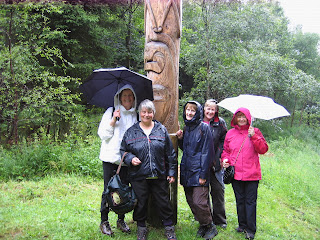 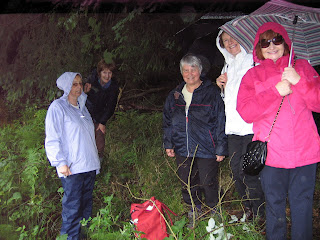 As a few of our core group were on holiday this week we decided just to do a short walk, 2.5 miles or so, just to keep things ticking over. The forecast wasn't good but we worthies donned our waterproofs and left the kirk to whispers of "daft"and "crackpots" amongst others. Some couldn't even understand what possessed us to go to Kelty! Whatever did they mean?
Today was the first walk we had done without doing a reconnoiter first, but we were armed with a map of the forest downloaded from the internet. A fine help that turned out to be. There were 3 routes on the map and we opted for the yellow route as it measured 2.5.miles. At the beginning there were sign posts with coloured stripes indicating that we were on the right track, but these were anything but regular as we moved through the conifer woods. The weather was so changeable we had waterproofs on/ off, brollies up/down, sunglasses...mmhh.. some folk just always seem to look glamorous.... and we were down to T-shirts as it was so warm.
The map was passed around everyone and each had a different opinion of which way up to hold it. You've guessed it. We came to crossroads and with each of us still having different opinions we had to admit that we had gone astray. We were just starting to use our Girl Guide training in animal tracks and the flow of a river, when as if by some miracle, a man and his dog appeared walking towards us, obviously recognising by our gestures that we were lost. How fortunate were we? He was on the committee of the Kelty Heritage trails group and actually lived in the forest. He was such a gentleman and asked to walk some of the way with us to ensure we got back on course. John and his lovely dog Kiery told us some background to the forest and the pits which once stood there. Once back to relative safety they left us to continue on our own. Thank you John, for your kindness.
Until then, we had had a real mixture of sunshine and spits of rain, then we heard the rumble in the jungle. With little or no warning the heavens opened and we found ourselves in the middle of a rainstorm. We took shelter under the trees (photo)until it became semi-torrential at which point the prevailing view was to keep moving as were were soaked by then anyway. As we emerged from the rainforest the sun came out again and the skies were blue with fluffy clouds - bizarre. Desperate for a cup of coffee we crossed over to Kathellen where we had lovely drinks, scrumptious cakes and scones and excellent service from pleasant waitresses. Now that was a lovely ending to our walk today, which according to the pedometer was 5.4 miles - more than double what we intended. We didn't actually see any of Kelty though and not a clippie in sight.
Posted by Quilters at Work at 11:33 No comments: