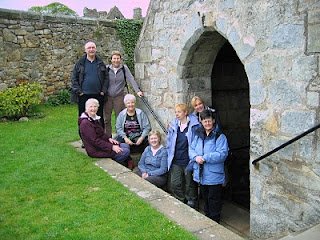 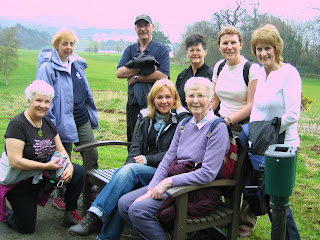 It was peltin' this morning when we arrived at church but you could see by our mode of dress that we weren't going to let adverse weather conditions disrupt the plan to walk around Aberdour. By the time we left the church at 1.00pm there was just enough blue in the sky to make a pair of sailor's breeks (a quaint old saying eh?) so off we jolly well went.
We began the walk at Hawkcraig Rd car park and passed by the Silver Sands where a family, even in April, was enjoying the sea breezes with their picnic table up and a wind break around them. As we progressed we soon got onto the Fife coastal walk and emerged at the wee harbour where there were many boats bobbing in the calm water - very picturesque. We paused at the shore where there was a chart of the islands and the hills we were looking at across the Forth. We identified Inchmickery, Oxcars lighthouse and only just saw Cramond island as it was very misty, but very beautiful today. How lucky are we to have these places of beauty on our doorstep. We proceeded up Shore Road stopping to window shop at the wee gift shop near the top; a nice place to go for a special present. We looked at an object in the window which looked like a toast rack but was actually a letter rack with three divisions separated by large letters. One of our group (with the initial W!) asked what T-S-O-P meant and felt a proper tumshie when she realised the rack was facing the wrong way. The second half of the walk took us along the High Street and out of Aberdour towards Hillend. We took a left at the road towards Braefoot Marine Terminal from where the products from Mossmoran are exported. We got off the beaten track are soon as we could though and had a lovely walk along an avenue of daffodils and wood anemonies. The scent of wild garlic permeated the air which signified that spring is over for another year. Still on the Coastal walk we took in the lovely views of the Forth with the golfcourse in the foreground. Many people were out walking, children cyling and joggers showing off. We emerged at Dovecot Park and retraced our steps along the High St and on then to Aberdour Castle.The Castle and its grounds were at their best today, but we were keen to get to the tearoom for refreshments. We had been so looking forward to one of their magnificent scones but alas, only there were only three left so a few of us had a dissy.We had a fine old chinwag there and planned the next few walks which will be posted soon on the church website. After our cuppas we went on to St Fillans church which is the most tranquil and serene setting imaginable. We took the time to go inside the church which stood open for visitors to enter, wonder at and worship. The church, or monastery as it probably was then, dates from before 1123. Each century additions were made and the connection with St Fillan made in 1390. In the 18th century it fell badly into disrepair and became a ruin by the beginning of the 20th century. From then, there has been a history of redevelopment, the latest renovation on the roof being completed in November 2009, only 5 months ago. This is a real treasure not only of history, but of the local people's foresight and dedication to preserve this sanctuary for the people of God.
The stained glass windows themselves are worth visiting the church for. Sandra pointed out the 'leper's squint' on the west gable. This little opening is now blocked up but in Mediaeval times, peering through it was the only way disease-ridden members of the parish could attend church services. http://www.undiscoveredscotland.co.uk/aberdour/stfillans/
This website will show a little of what is in store on a visit to St Fillans. Winnie recognised that the slate on the church roof was not Scottish slate but possibly English. This may have been because before it became a Church of Scotland St Fillans was Scottish Episcopal with strong connections to the Church of England.
This was a 4 mile walk and we all felt satisfied when we returned to our cars. On days like these we are renewed by the simplicity of photographing a bee on a flower, listening to birdsong and just sharing time and conversation with like-minded people. "Then sings my soul, My Saviour God, to thee."
Familiar?
Posted by Quilters at Work at 10:11 No comments: 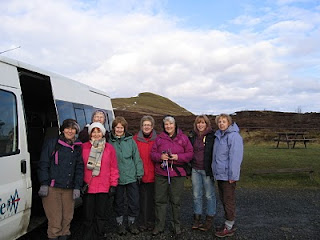 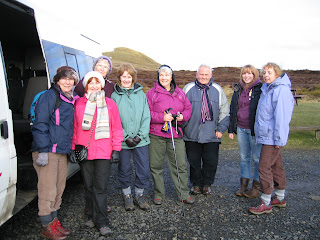 We've been watching the weather forecast for the last week wondering if we would manage up the hill today.On Tuesday there was such a fall of snow that we were on the point of cancelling our walk. However the advance party was sent out on Friday to reconnoiter. Although the roads were passable, the walk we intended to take starting from Craigmead car park had far too much snow so we made the decision on health and safety grounds to ascend the other side of the East Lomond.
Ten of us met at 07.30am at the kirk and travelled by minibus heading for Falkland. We took the narrow road off A912 which leads to a car park on what might be called Purin Hill. From there, even at 0800am we had stunning views of Largo Law and the Forth and snow capped hills away in the distance. A few of us had walking poles with us so decided to attempt the ascent up Falkland Hill. However, we only had the choice of walking through snow or on a path of sorts which was a bit clarty so we didn't go too far. We stood in a circle and had our Easter service there and it was lovely - cold, but just right. We were belting out " Jesus Christ is risen today!" when a hill runner sped by, I'm sure wondering what had possessed this group of unusuals to be singing their hearts out at such an early hour. Ah well, we could have told him that we had indeed been possessed. Possessed by the need to celebrate Jesus' resurrection by praying and praising in our own simple way in a place where we could feel at one with God.
After our wee service Lorraine and Hannah went on up the hill to the very top (fit or daft?) and a few others went half way (plucky). The rest (realistic) took plenty time and picked our way carefully back to the minibus.
Back at the church, it was all hands on deck to get the bacon & egg butties and hot drinks made and we ate together and agreed this was a good habit of old to be resurrected. I think the minibus might be full next year....
Posted by Quilters at Work at 06:12 No comments: