Scoop Waddell here reporting on today's beautiful walk around the Common Loop, Glassart's Den and The Clink at Auchtermuchty. We chose a Saturday this time so that we could get an early start hoping that some folk might have managed to return in time to get to the Rovers in the afternoon. There were two new faces, Audrey and Carol, and they were warmly welcomed. After several of the more assertive members deliberated in which cars we should travel, we all piled in and were ready for the off, except for one who simply had to go and spend yet another penny at the church before we finally left around 9.40am. There's always one eh...
It was a lovely winter's day with frost sprinkled across the fields and on the trees like icing sugar. Low fog was suspended eerily above the surface of the fields and the Lomonds, viewing the opposite side from our usual perspective, were dark blue with low lying cloud resting atop.
Once gathered at Muchty we began at the Cycle Tavern in Burnside and made our way up Bondgate towards the school. We all knew this walk was on a gradient so weren't surprised to be out of puff fairly quickly, those with the shortest legs bringing up the rear, but not dawdling by any means. We remarked on the old street lights which must have been converted from gas light but are still in working order. When we ran out of houses to nose into, the tarmac became rough path which took us to part of the Common Loop called Whitefield. Further on, and walking down towards a car park was the area known as the Mairs which used to be the main road from Auchtermuchty to Newburgh.We gathered again at the information board at the car park and tucked our troosers into our socks for the next glaury part of the walk. Across the main road we slipped through a space in the hedge and descended some steps which led us to a boardwalk then a footbridge o'er the burn. 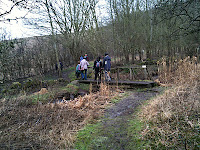 Single file was necessary here and great care taken lest we slid on the wet mud. We emerged at the entrance to Glassart's ( Glessart's to the locals)Den 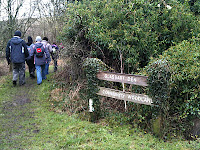 and began a fairly steep ascent through the community woodland where we happened upon several enormous fir trees across our paths having been blown down by the recent gales. 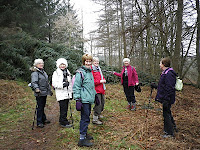 We were glad to pause for a short blaw at a picnic table half way up. A great vantage point and perfect for a photo. 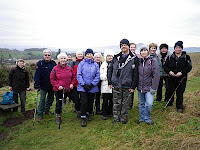 Now once we had reached the top, the idea was to add on the adjoining Clink walk, but we did get a wee bit off track there until some local dog walkers put us right. Out in the open now we had the most wonderful vista of the hills with Muchty ahead of us at the bottom of Mournipea. At this point the group became very spread out. Neither those striding out in front nor those strolling at the back willing to compromise. Mmm...
In the town, the first person we saw resplendent in his kilt and playing his famous accordion was a bronze sculpture of the Laird of Auchtermuchty, Sir Jimmy Shand. And of course we had to be photographed with him. 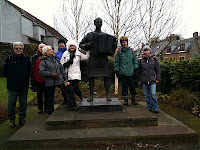 A brisk Bluebell Polka along Distillery Street brought us to the Cycle Tavern where we started and where we had planned to have a bowl of broth to thaw us out. Now then. I had made a call last night to say that our walking group was going to descend on them around 12 and asked what kind of soup would be on offer, to which the response came, "Ah've nae idea." An enquiry about scones brought the same apathetic reply; no vestige of interest in pleasing her customer, and so I thanked her and hung up. Having been there a couple of weeks earlier when doing the practice walk, and detecting the same attitude I was a wee bit concerned. The lady behind the bar today was not at all delighted to see us and went away to find out if there would be enough soup, returning after some time with the right answer and telling us where to sit. Others in the group who approached the bar also felt unwelcome but the last straw was when we were told that they only had 6 soup plates so we would have to eat 6 at a time. I called time on lunch at the Cycle. We left, though some did use the facilities before walking out. It was astonishing that in these days of businesses going to the wall through lack of trade this pub did not value 15 people enough to treat us courteously and jump through hoops to ensure good service. They not only lost over £60 but their reputation has been tarnished. I have to wonder what tourists would have made of their attitude. Anyway, we had to try somewhere else - Forest Hills Hotel - but they don't do lunches at all. Helpfully suggested the Cycle Tavern though.
After a super walk we could have done with a nice cosy pub lunch before our parting but the moment passed and the consensus was to go home hungry.
A short and very hurried prayer, then back to the cars, still moaning our heads off about the Cycle. Nursing a grudge is very satisfying sometimes, but think on this: 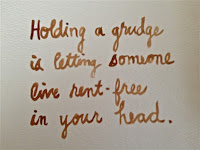