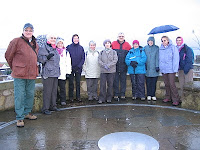 Despite the various euphemisms I heard before the walk - dull,dampish, 'not promising'- the weather today was dreich, a fine descriptive word of old Scots origin. Another of old Scots origin, Bob Docherty, led us on a history walk of Burntisland which was very interesting indeed. We parked opposite the Sands Hotel and headed towards the shore, dipping under the wee railway bridge. The first point of interest Bob described was a lovely victorian building which used to be a tearoom, then a shop (we could all remember buying an ice cream here in our childhood) and now is a bed and breakfast. Moving along the shore a few remarked how the tide seemed to be further in than usual, and a wee bit choppy whatsmore. Passing the Beacon Leisure centre, we all reminisced again of days when the swimming pool was al fresco, and Bob told the story of his grandfather, who was provost of Burntisland, having the dubious honour of opening the original outdoor swimming pool by taking the first dive from the top diving board! We walked around the promontory at Lammerlaws where we heard about the geology of Burntisland, and then on to the docks. Here we listened to the history of Briggs Marine Services - Rona's son works here so we were brought up to the present as well - and I found myself looking up the company on the web when I came home it was so interesting. Also nearby is B Fab involved in the manufacture of offshore and renewable energy fabrications where boss John Robertson won Fife's Businessman of the year just last week.
Moving on to Forth Place where we saw the old Burntisland railway station and admired the architecture, imagining what might go on behind all of the windows. Apparently it is to be sold soon, but we were not sure what the purpose would be. It was Mary's turn to identify the spot where the 'greasy pole' used to stand. This was a challenge, centuries old, whereby young men would attempt to climb a pole such as a telegraph pole which had been covered with grease presumably from the ships, to claim a pot of money from the top. The more astute participant would wait until the end of the challenge by which time most of the grease had been absorbed by the keen,naive ones, and he could shin up the pole with ease and claim the prize.The next point of interest was in Somerville Square where Bob referred to a wall plaque indicating where a famous daughter of Burntisland had lived in early 19th century. Mary Fairfax Somerville was a mathematician and astrologer and had such exceptional intelligence she was considered the most remarkable woman of her generation. Whatsmore she was entirely self taught. It was pretty cold now so we were glad to pop into the kirk. What a fascinating church is Burntisland Parish Church. Church Officer Ian Motion was kind enough to open it up for us to walk around at our leisure reading all the plaques and sitting in the old pews with doors at the end. Some of them still have names painted on the doors where a lady and her maids or estate owners would pay to have that seat set aside for themselves. The kirk also has great historic interest as this is where the Authorised Version of the Bible was authorised by King James VI in 1611. And so next year will be it's 400th anniversary. Some of us fondly recalled favourite verses from KJB comparing them with those of the Good News Bible which is in common use these days. Off again towards Rossend Castle this time where the visit was short as we were all so cauld, but long enough to hear Bob's history in a nutshell. We had a wee climb ahead, 56 steps to be exact but it led us to a terrific viewpoint where our tour guide pointed out all of the attractions we had not been able to visit.
Up ahead of course was the Binn, the protector of the town from extremes of weather. The town's shield of arms shows these Latin phrases - "Portus Gratiae" (Safe Harbour) and below "Colles Praesidio Dedit Deus" God gave the hills for protection). With thoughts of coffee at the Sands Hotel we were off at the toot now.It was even more pleasant today because Lorraine had made two cakes for us on account of her 'special' birthday the following day. We can thoroughly recommend her Weetabix cake! Thanks Lorraine . Hope you have a happy day tomorrow. We would also like to mention the warm welcome we had at the Sands Hotel. The staff were very accommodating so will have our custom again. Thanks Bob for imparting your knowledge of Burntisland with us, and I hear you have another history walk of Dunfermline up your sleeve. Well, you're hired!
Posted by Quilters at Work at 01:01 No comments: