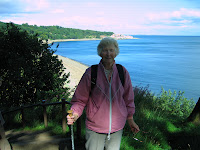 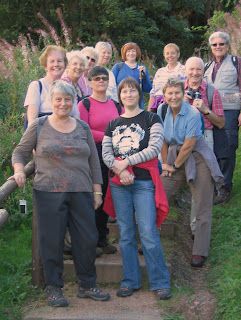 We had to be off our marks from the kirk as we had to catch a bus at Mid Street before 1.00pm. to take us to the beginning of the walk at East Wemyss. We gathered at Mid St in plenty of time but when the no 13 was a couple of minutes late there were a few doubting Thomases ( Thomases?) who questioned my competency in looking up a timetable. Anyway we all piled on a wee 20 seater and that was the bus filled. Not being used to public transport myself, I was irritated that it kept going on wee detours; through Dysart and West Wemyss, and even down to the shore at East Wemyss. Anyway, we disembar....alight... got off the bus at Macduff cemetery, the start of today's walk. It was a bit breezy which swept the grey clouds away over towards Edinburgh and left our Fife skies almost Royal blue. We could feel our cares drifting away as we strode out and absorbed the beauty in our field of vision, especially the sun striking the Forth which sparkled with diamonds and sapphires. We followed the coastal path arrows which took us down some very steep steps to the shore. Folk were well prepared for this today though as a few were equipped with walking poles. Once at the shore the walk was easy and so was the conversation. There were thirteen of us today. Hi to Kerry who was with us for the first time. With East Wemyss behind us, Wemyss castle was towering above us on the cliffs. This is the ancient seat of the Earls of Wemyss, still inhabited by the family today. The castle itself is closed to the public but the gardens are open between May and July - missed it again. It looks a bit like Colditz actually. Approaching West Wemyss we stopped off at St Aidan's, a beautiful old church and a place of perfect peace and serenity. On the move again we kept to the path alongside the sea wall which is in very good condition and looks really attractive but actually didn't manage to keep the river Forth out of the Wemyss folk's living rooms in the freak storms of March this year. The Fife coast had a real battering at that time but has made a remarkable recovery. We were really taken with the old buildings in West Wemyss although there are many empty houses. Most of the village and Coaltown of Wemyss also would have belonged to the Wemyss Estate at one time but in the last few years have been taken over by Kingdom Homes. It is such a historic picturesque town, we hope that it is brought up to date by the new owners and given a new lease of life. The wee harbour is really lovely but the best view of it and Blair point is from the top of the long and very steep stairs we are standing on in picture 1.
This is Sandra on her own - how lovely is this.
Now I must go and see the very very Last of the summer wine - back later.
Well, that was a wee bit of a let down for a last episode. Maybe it is time to bow out gracefully. I wonder, can you spot a Foggy, Compo, Pearl, Nora or even a Marina in picture 2?
We soon had the winding gear of the Frances Pit in sight meaning we were only minutes from Dysart, and we stopped as we entered the village to read the lovely memorial to the Pit and it's workers. We were still able to get a last terrific view across the water before we headed downwards towards the harbour.

We sang this hymn this morning in church and it was going through my mind as we shared with each other the feeling of gratitude for the beauty around us today. Quickening our pace now we had to make sure we got into the Harbourmaster's house for refreshments before it closed. The poor girl wasn't expecting 13 customers at the last gasp so it took some time to be served but she was pleasant and we were patient. We had not yet completed our walk so the next picture shows the group at the harbour after coffee looking wabbit but happy. 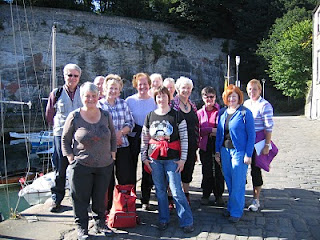 And so a daunder through Ravenscraig Park took us back to Pathhead where we gathered as always and asked God for His safe-keeping until we meet again.
Posted by Quilters at Work at 10:10 No comments: 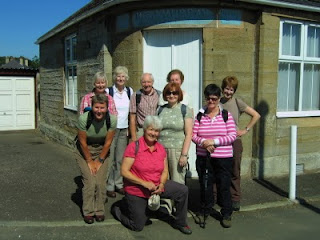 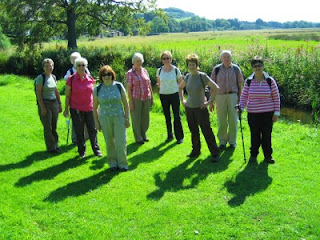 We took today's walk from a leaflet prepared by the Rambler's Association, St Andrew's Branch. There are 14 walks described simply and accurately and split into short, medium and long walks. We would recommend the leaflet to other groups and we'll definitely use it again. We parked at Fluthers Car Park in the middle of Cupar and crossed the busy A91 into Station Road then off into Waterend Road which made us feel we were on a country walk right away. The footpath bordered the river and had a good bitumen surface all the way. Clearly it is a well used track for dog walkers and we had to be vigilant lest we trod in deposits left unscooped! Under the South Bridge and a right turn took us into Millgate, a lovely street of beautiful bungalows all with gardens in full bloom. We so thoroughly enjoyed comparing and judging the flowers and giving unqualified opinions on the layout of front gardens that we hardly noticed the incline leading us into Millbank, another lovely residential street with manicured lawns and hedges.Leaving the houses behind we were now on the flat Brighton Road flanked by fields and the great views of countryside that you can only get in the Howe of Fife. A mile goes pretty quickly when you are chatting so we soon arrived in Cuparmuir, a wee settlement of about 35 houses and a phonebox. In the first photo above we are standing outside a house which used to be the village shop. The current owners have tastefully modernised the shop into a home but left the name of M & J Murray above the door, which was really very thoughtful and I'm sure of interest to people passing on foot. Further down this road, Commerce Street, we were again passing our opinions on the renovation of all the houses and the school, then under the railway bridge took us towards Damside Mill which produces animal foodstuffs. Remarkably no pong. Just past the mill we crossed the River Eden by the Simpson Bridge which was built in 1904 for the workers to reach the mill, a paper mill at that time I think. But I can't find out who Simpson was. There was a bit of an incline from there till we reached the main A914 which lead us into Cupar town once again. The first lovely house on our left, Mount PLeasant, had us hanging over the dyke gawping at all the flowers and vegetables they were growing. Apple, pear and plums trees, heavy with fruit, and in the garden below were asparagus, beetroot, cabbage, potatoes to name a few, and sunflowers which must be ten feet tall. Moving on then we left the busy main street via Cow Brae and back to the river again. We appreciated this peaceful stretch after the noise and fast traffic of the A914. You can see by the second photo how relaxed we were. Look at the green, green grass of Cupar too. What a beautiful summer's day we have enjoyed. At the rear of Fisher's laundry are some stairs which took us back to the railway line and we were soon thinking about our coffee stop which was to be at Watt's Eaterie off Station Rd. As the sun was still shining we chose to sit outside and we waited for our order to be taken. We waited patiently. A delightful chatty young waiter took our orders and we waited for them to be served. Our waiter was keeping cool but clearly under pressure and brought the biscuits and cakes first. Then we waited for our drinks. Eatables now scoffed, the tea came but the coffee drinkers waited. Then TA-DA! The coffee arrived. Phew. Because we had spent some time before our refreshments we really had to get the bill right away. Mmm.... Yip more waiting, followed by an excessive estimate by the stressed out waiter, until we finally took charge ourselves and sorted out the bill. Oh dear Watt's this was pretty disappointing. Didn't spoil our enjoyment of the good company though as we chatted and planned how to augment the membership of our wee group. We said our goodbyes at the carpark today and are already looking forward to our next walk in a fortnight.
Posted by Quilters at Work at 10:57 No comments: