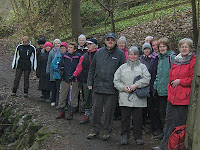 It started off a really cold morning, and our non-walking kirk friends were fair sorry for us. But we were raring to go today as we hadn't had a walk together since November, so 17 of us jumped in the minibus at 1.00pm and off we scooted on a jolly to Glenrothes. Accentuating the positive is the secret.
We parked up behind St Columba's church and made for Riverside Park, carefully dodging the traffic on Leslie Road. There was still a fair amount of ice in the park, but we chose our steps and avoided any misadventure. Once among the trees however, it was great to walk on leaves and pine cones and we really felt as if we were right out in the country yet we were only yards from the busy A911. The River Leven which we followed for a short stretch was flowing very fast today. Just as the incline began we had to squeeze through a wee space where a pretty big tree had fallen over. Now the trailblazers among us who had our walking poles with us were off at the toot and left the tortoises to bring up the rear. They caught up again at the Fettykil Fox just before crossing over to Whinneyknowe. As we walk, without really being conscious of it, we move position in the group and so constantly change the people we are talking to. Topics are many and varied.
Yes, we're nearly there. We climbed the stairs from Ballingall Drive, pausing only for a short blaw, and reached today's watering hole, Balgeddie House Hotel. We had given the hotel a bit of advance warning that we'd be wearing walking boots so we were directed to Spencer's bar on arrival. Little did we expect a very pleasant welcome from management and shown to tables all laid out in readiness for us. The hotel had ordered in scones especially for us with strawberry jam and cream. Whatsmore the sun was streaming in through the windows at that time and it all made for a delightful wee breather. Once refreshed, it was all downhill from there, and you could hear some sighs of relief. We did come upon a really lovely part of the walk where we had to walk under the A911 with another fast flowing river on our right. But none of us knew which river that was.

Emerging at the pond, again back in Riverside Park, we noted that the snowdrops were beginning to poke their wee green shoots through the hard ground. The first sign of spring. In a few weeks there will be carpets of snowdrops and crocuses on all of the green spaces in Glenrothes Town Centre. A sight to behold each year. Apologies, I had kept the next and last incline a secret until now. So after a few more groans and pechts we reached the housing scheme and back on the level once more. The light beginning to change now we piled into the minibus for our homeward journey. 4.2 miles in almost three hours! Now that was a dawdle.
Posted by Quilters at Work at 09:36 No comments: