We've been planning this walk for a year knowing that we ought to avoid the height of summer as we'd be eaten alive with midges down by the loch. As it happens, today was an absolute scorcher,  so we we were very fortunate that it was too hot even for the midges.
We began at Kinross Pier where we took in a terrific view of the loch, Lochleven Castle and the hills beyond. Good for the soul. So, laggered with our factor 50+ and donning an assortment of interesting headgear, off we toddled in twos like nursery kids. 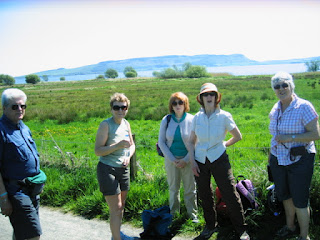 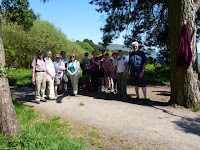 Kirkgate Park was very busy with families playing ball games, swimming in the loch and having barbeques. The scouts were there too having a raft-building competition and it was a lovely atmosphere.This was to be a 7 mile walk so no dilly-dallying, in fact perhaps we should have stopped and stared a little more today. 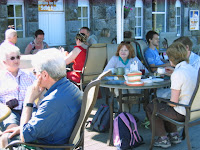 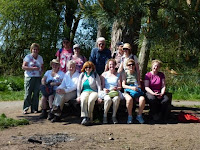 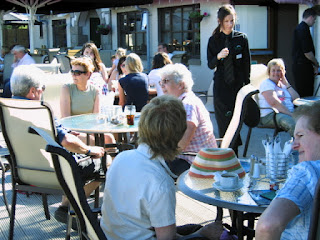 However we had to get caught up with each others' lives which is always interesting. We usually like to do circular walks but it was a case of there and back today so we stopped just short of Carsewell Bog and returned by the same route, stopping at Burleigh Sands for a wee rest and some photos. And at Mary's gate we went through the woods, around the Golf course and through Kinross town just to vary the walk a little. 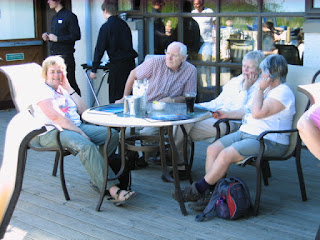 Refreshments were at the Bistro back at the Pier  so we sat under huge sunshades on the wooden decking looking out over the Loch; it must have been over 22 degrees, hotter that Turkey today according to Joe.
Just glorious.
We did have to wait a good half hour to be served with our coffee and scones but we were in such good moods, we just enjoyed the company. 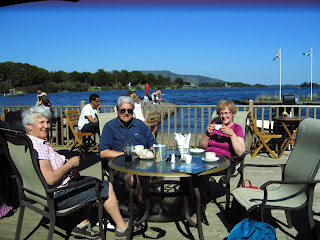 Posted by Quilters at Work at 11:48 No comments:

We had a lovely service at church this morning. The Albany Deaf Choir visited and the congregation was enthralled with the choir's signing of the Lord's Prayer and several well known hymns. Today is also the beginning of Christian Aid week so we had an encouraging sermon from Robin followed by a soup and sweet lunch provided by the talented Bennochy cooks in aid of CA. Lots of thoughts and emotions today then; plenty to be going on with all week.
So we left much later than usual in 3 cars heading for Falkland. Parking up at the main car park we put our hoods up (!) and wandered through the historic royal burgh soaking up the passage of time.We discussed the cottages as we passed, most of which are at least 200 years old but have been renovated to a very high standard, situated in an idyllic setting, surrounded by rustic charm and overseen by the magnificent palace. I've been watching too many episodes of Location, Location, Location.  As we left the town we admired Falkland Hill up there to our left - been there. Done that. 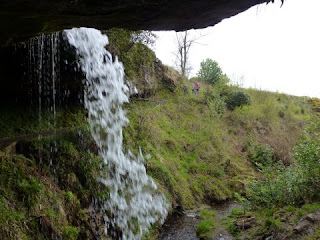 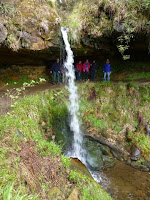 Just into the estate we passed Falkland House which is  a residential school for boys who have additional support needs, and then we were into the trees. What a lovely walk through the woods, over wee bridges, through a tunnel and we hardly noticed that we had already begun to climb through Maspie Den. There were a few glaury and quite dangerous areas where the recent rains had made the stone steps slimy. The steps began to get steeper but there was not a suitable place to stop for a rest so we just had to pech and keep going, conscious of one of our walkers who has had a recent op but still determined to get to the top. We gathered for a photo at the Yad waterfall and the overhanging rock  then a wee short burst of energy brought us to the very top and that's where we absorbed the view of the East Lomond and beyond.

Sometimes it is just as difficult to go downhill as up, so a few were complaining about knee pain as we descended through the forest, noting all the trees still left upturned, some over paths, probably since the gales we had in January. As we emerged from the woods we came upon a house and workshop - Tom's Place - where Tom spends his days making garden furniture from wood. Thank you to Tom for showing us photos of the Temple of Decision which we didnt have time to visit today, and also of Falkland House School. Some of us were very interested in the school and plan to visit at the open day in September.Still descending we passed a dry stane dyke which had face-stones with old Scots words engraved - Bletherin', Stravaigin' etc and then into more woods before we eventually reached our watering hole for today - the Pillars of Hercules. Wacky name for this lovely organic cafe and shop where you do get an exceptional quality of coffee and home baking. Yum yum. 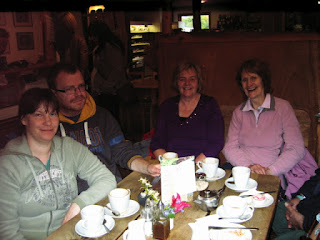 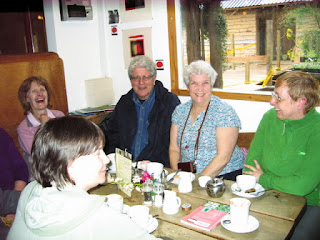 .
After a nice rest we retraced our path until we reached the 'Bletherin' dyke then took a short cut past the cricket pitch to get back to Falkand again.
Only 8 hail-hertit kempies braved the wind and rain today although due to the amount of blethers we had to take part in as we walked, we hardly noticed the weather at all until we returned to the cars. It's good to hear folk asking about the next walk already.

Posted by Quilters at Work at 19:30 No comments: