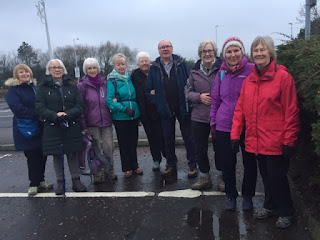 Twelve walkers set off a bit earlier than usual at 12.30 and made our way to the car park behind Boots in Glenrothes where we intended to start our walk. When we got there we encountered our first problem as sneaky Fife Council have introduced a 3 hour limit on car parking in Glenrothes car parks. I might add that they have done this without any consultation with our group whatsoever. We decided to take the chance that we would be back within the time allowed and set off. We had agreed to begin by stopping in at Studio 8 as there was a craft fair going on but once we got there we were all keen to get off again due to our tight schedule. We crossed over Lidl's car park and into Town park passed some unusual looking totem poles no doubt erected by a tribe of Indians in the early 1900's. Actually the 14 poles are a sculpture created by artist David Harding in 1976 to represent architectural styles of early civilisations including Egyptian, Greek, Roman, Inca and Aztecs.  We carried on through the park alongside a very high and fast flowing River Leven before an impromptu photo while Dianne had her picture taken sitting on the back of one of the stone hippos littered around the park. 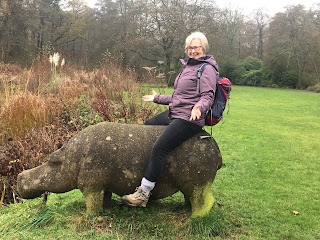 A bit further on , after some muddy boots bits we came to the main Glenrothes to Leslie road and walked up to the roundabout by the giant irises which appeared first at the Glasgow garden festival of 1990. We had arranged for our coffeeand scones stop early in the Fettykill Fox except that they didn't do scones, but not to be outdone Dianne had brought a fine scone selection, some butter and jam with her. We all tucked into them while chatting about nothing in particular and were served tea/coffee by a very helpful member of staff. It was getting a bit when we got ready to continue with our walk and started to leave. As Janice was getting up to leave she got her foot caught on the leg of the table and fell onto the fireplace injuring her back. The result was that an ambulance was called by a staff member. However when the attending paramedics arrived it was decided that Janice was able to go home without a hospital visit as she thankfully wasn't badly injured. By this time it was obvious that darkness was falling and our walk should be cut short. There have been some bumps and scratches on previous walks but this is the first time anyone has been injured during our coffee break. Roll on our next one.
Posted by Quilters at Work at 09:37 No comments: 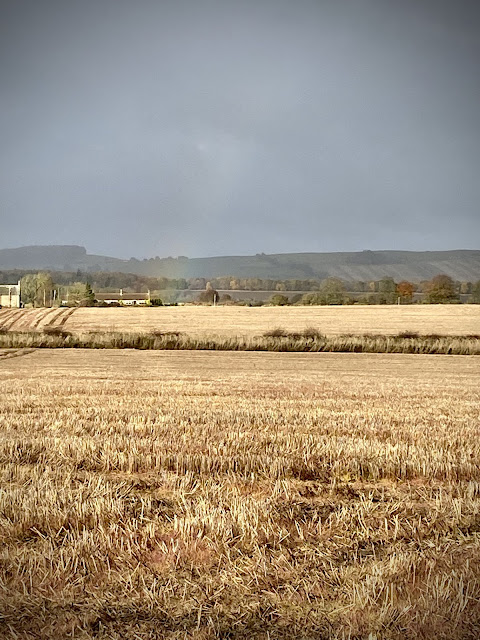 Meeting at our usual spot, we were prepared for a bit of a wet one today, not at all like the last time this walk was done in June 2017 when looking back on the last blog we were wrapped in “hoodies and scarves” this time it was hoodies, scarves, hats and brollies! A bit of a dreich welcome for our two new walkers Elizabeth and Irene.
Parking on the Main Street of Coaltown of Balgonie we headed up the path running beside Lady Nina Cottages onto a farm track. We followed the track pausing briefly to stop at the bridge which takes you over the railway line just in time to give a cheery Bennochy Walkers wave to the train passing below us. Much to our enjoyment the driver recipricated by a toot of his horn! This farm track forms part of the Balgonie Estate which according to the signage is a conservation area for the grey Partridge which has suffered a 91% decline since the 1960’s.
We carried on battling against the rain, through the mud and glaur, slipping and sliding along the remainder of the circular route until we reached the housing scheme at Milton of Balgonie with its welcome mud free pavements. Before long we were back at our cars stopping for a quick photo before heading back to Kirkcaldy Garden Centre which was our coffee stop for today.
Once the tables were organised to seat the 14 walkers, it was time for our coffee and cakes. Whilst enjoying our refreshments we were joined by Ian and Sybil for the coffee and chat.
One things for sure however damp the weather, it never dampens the Bennochy Walkers chit chat!
Until next time,
Kerry 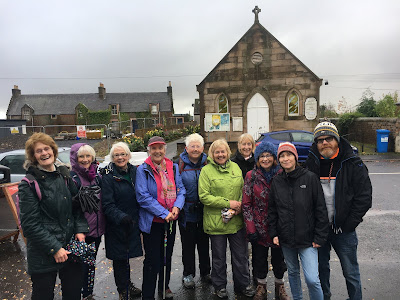 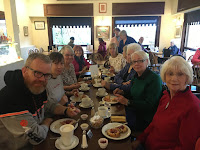 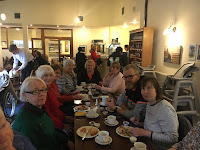 Posted by Quilters at Work at 10:24 No comments: