Although this was just a wee short walk, it was a bit special as we were treating it as  a pilgrimage. It was also special because we had children with us -  Keiran, Brodie and Morgan. At church this morning, the worship committee were taking the service as Robin is on holiday. Their theme was Pilgrimage and so the Walkers decided to support them by actually doing a walk involving saints who have a place in Fife's history. We started at St Serf's tower in Dysart  at 9am reading a wee passage about how St Serf came to be connected with Fife.
The weather could not have been kinder. Warm, sunny and so quiet. Only our chatter broke the silence walking through the woods at Ravenscraig. So, so peaceful. We made our way down the Path and past Nairn's buildings, as was, at the harbour, then crossing at the traffic lights at Pillans Pie shop, as was. Up Coal Wynd past Beatties bakeries, as was, along Townsend Place then down Oswald's Wynd past Allen Litho, as was. We walked through the grounds of the Old Kirk and on to St Bryce Kirk, the parish church of Kirkcaldy. We read a little about St Bryce or Brice and then crossed over to Adam Smith college before making our way back to Bennochy where we managed to find time to get some refreshments before the service at 11am when our Worship Committee made a great impact on the congregation with their talks, prayer and old hymns prompting thoughts of our history and  how and why we came to be here. A wonderful start to a day.
Posted by Quilters at Work at 01:12 No comments:

The recce for this walk was done a few weeks ago with the South Queensferry Ramblers. We thought there wouldn't be a big take up today as it was advertised as a 7 mile ramble with lots of mud and steep gradients. Sixteen walkers took it on and I heard comments like, " It's not that muddy." Hill? What hill?"  We must be getting fitter and braver then.
Starting off at Lochore Meadows we crossed the Main Road into the housing estate and then off into the country through what is called Torres Lane. There is a very gradual incline up to the point where Hare Law Cairn was pointed out. The Victorians from Ballingry discovered the foundations of a wall under a pile of stones at this point. Within the wall they found three cists , kitchen utensils , teeth and bones inside a food vessel. The cairn was left open overnight to allow locals to view the discovery but the treasures had all been nicked before dawn.  So now there is just a wee mound with a tree planted there to mark the spot. 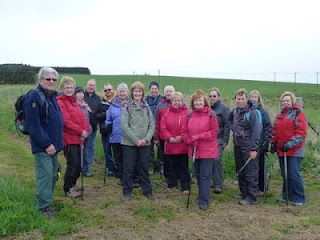 There are terrific views of the Lomonds, particularly Benarty from there, but today the mist was dumbing down the beautiful greens we saw on the recce.
We also talked about the Westfiled plant down there on our left which is the first power plant in the world to burn poultry litter and turn it into electricity and fertiliser. Now that's smart. Let's all start keeping chickens to help keep the leccy bills down.
We only just reached the metropolis of Cardenden when we had to veer off to the right at Woodend into the countryside again. The half way mark.
The challenge that we'd been warned about was there in front of us. Not sure if there is a name for a climb of 200 feet - a Pimple maybe - but it certainly got our hearts pumping. We hovered at the top to catch our breath and to watch the rain come tumbling over the Lomonds heading our way. It was all downhill from there which isn't always easier though. By the time we were on flat ground again it was absolutely pelting! Some of us were not exactly prepared for bad weather as we are normally fortunate, but no matter what we were wearing we were all drookit when we got back to the Lochore Meadows cafe ony to find it had closed at 3.00pm today. Sack the walk leader. We would have made an awful lot of puddles on their floor so maybe just as well. It was encouraging that most folk enjoyed the length of this walk and so there will be more similar ones in the summer months ahead.

Posted by Quilters at Work at 03:10 No comments: