Due to illness, holidays and other more pressing engagements there were only 7 walkers today, so we left Bennochy Church at 1.00pm in two cars. It was Janice's suggestion to walk around Auchtertool so we all followed her, parking at the newly refurbished Tiel Restaurant ( Kiwi as was) in the village.
We set off down Newbiggin Terrace which leads out into the country but we had to walk in single file for our safety all the same, as the traffic on this road for some reason travels at maximum speed. We hear that there is to be a speed limit imposed shortly; this may be frustrating but welcome if lives are to be saved.
Half a mile ouside the village we turned off to the right on to a single track road and we were able to take in some lovely country views across the fields as well as noting the indigenous flora and fungi in a large copse of trees shown on an old map as Kilnuny Plantation. There were one or two inclines to contend with, but none so steep as to make us puff. Off right again, this time on a track between two fields and it was here that we first had a glimpse of the Forth in the distance. It was a bit overcast but we could still make out the Bass Rock. To our left we discussed what we now know to be Mourn House, now derelict, and we wondered why folk don't buy these old farm cottages as they used to. The scenery is spectacular and no bothersome neighbours after all. Maybe it's something to do with most of the ruins being of historical interest though; there are a few castle remains scattered around Auchtertool - Hallyards, Camilla, and we happened upon Balmuto Castle ancestral home of the Boswells since 15th century. The grounds are private of course but we had a wee rest at the bridge over the burn at the entrance to the Castle drive; a nice spot for the photo shoot. 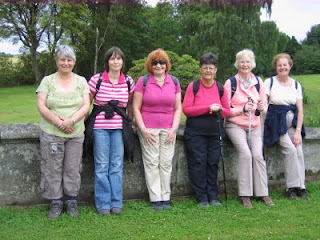 Further on we stopped to speak to a couple of horses at West Balbairdie Farm, and then without planning it, swapped around so that we had different folk to continue our journey with and more new conversations.
When next we came to a junction, with Kilrie Farm off to our right, we turned left back on to the 'main' road, well it was tarmacked at least,until we reached yet another derelict farm cottage which prompted a discussion about families who would have stayed there and worked the land. Just as we walked on, we noticed to our horror that an area at the road end to Lambert's Mill was covered in the dreaded Japanese knotweed. Some of us had watched a TV programme about this a couple of nights previous so were very knowlegeable on the subject. We talked as if the Triffids had arrived! One thing was obvious though, unless the plant is dealt with timeously then it will invade the adjacent fields very soon.....
Although there was no sun today, neither was there any wind so we were hot and dry by the time we reached the Tiel Restaurant where Janice had arranged some scones, shortbread and coffee for us. We were pleasantly surprised by the environment and asked the nice waitress to take our photo there. 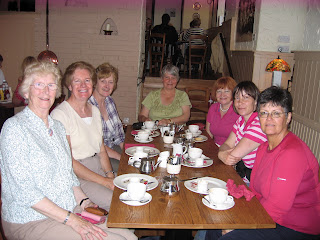 From the head of the table > right we have Grace, Janice, Kerry, Winnie, Sandra, Irene and Dianne. Just a wee pickle of us this week, but a nice wee pickle.
Posted by Quilters at Work at 11:24 No comments: 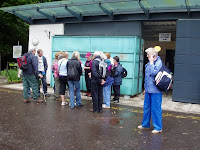 “Is this your rainy season?” was the question asked of Mary by two lady visitors from sunnier climes at Dunkeld Cathedral. “No” replied Mary “this is our summer”. Well this should give you an idea of our summer outing – best laid plans and all that.

1pm on Sunday saw 18 of us leaving Dundee University Nursing Campus. Not before wishing Kerry a very happy birthday and giving her a fine rendition of the same. The sun was shining and we were heading north to Birnam and Dunkeld for a lovely circular walk, to culminate with high tea at the Royal Dunkeld Hotel. T in the park was well underway and we were careful to avoid being directed there, although a few members had their offspring there reveling in the mud. Little did we know that before long we would be in a similar situation? A lovely drive to Perth and then the heavens opened. Well some on the bus were certain that when we reached Dunkeld and the bus park the shower would pass, and it did.

All out and first stop the well cared for toilets. 30 pence entry fee but two vases of fresh flowers in the Ladies – I ask you where were the tourists to see such a sight! All refreshed, gathered together and ready to go a wee quiz was handed out just to give a fun element, thankfully in plastic poly pockets. Off we set up the drive towards the Hilton Dunkeld House Hotel.A small herd of deer were seen at quite close hand in Atholl Park. The grounds of the hotel are part of the Perthshire Big Tree Country and we saw some amazing tree specimens. 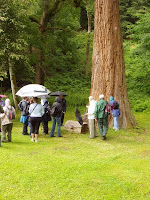 For those who might want to go back a map of the trees in the grounds can be downloaded from the hotel website. At the top of the drive with the hotel in sight we had the first drops of rain. Donning our jackets, plastic ponchos and assorted rainwear we turned off the drive to walk along the bank of the beautiful River Tay. As determined as we were to enjoy the walk the rain was even more determined. 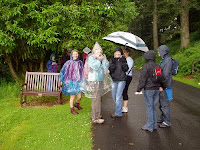 One stop amongst the trees, which gave some protection we decided to make a dash for Dunkeld Cathedral. We now had to contend with flooded footpaths but we made in into the sanctuary of the Parish Church of Dunkeld. An extract from their web page states the following

“as you enter the Cathedral grounds you will be struck by the beauty of the setting and the sense of peace – a sense of the presence of God. Come as a visitor, but become a pilgrim as you walk where Christians have lived and worshipped for centuries and take some time to pray, to be still and know God”.

After spending some time exploring the treasures held within the church we took the unanimous decision to abandon the walk and head for the hotel. We walked by way of Dunkeld Square, past the Ell shop, Duchess Anne Hall, Atholl Memorial Fountain and the lovely wee houses owned by the National Trust for Scotland, hightailing it to the Royal Dunkeld Hotel. Thankfully our early arrival was anticipated by the hotel staff and they accommodated our request for an earlier tea (not before some member of our group tried drying their clothing with the hand drier in the gents toilet). You would never know by the buzz as we enjoyed our meal that some members were soaked to the skin. Thanks to all for their perseverance.
Happily fed and watered and still raining it was back to the bus for our journey back to Kirkcaldy. Guess what, Kirkcaldy had only had a few wee showers – ah well.
Posted by Quilters at Work at 14:44 No comments: