We chose to do this part of the Fife Coastal Path on a Saturday because it is a bit longer than we usually walk - 8.2 miles - and so we started earlier in the day. Given that it was a dreich morning we weren't expecting many walkers to turn up at Kirkcaldy railway station in time for the 1200 to NQ. However, ten 'hardy chiels', as Rona described us, met up and made the short train journey, the majority taking advantage of a discounted price using their special Scotrail loyalty passes. The pedometers were set at Waterloo Well at North Queensferry, right under the magnificent Forth Bridge which makes us all feel so very proud to be Scottish.
A couple who were busy in the morning met up with the first lot an hour later at Inverkeithing and so there were 12.
It is strange that when it is drizzling, the walkers go at a fair skelp, thinking I suppose that we would become less wet if we walk quickly. It didn't work today though. The Path was in excellent condition and because most of us had done the coastal Path before we were familiar with the route, another reason for making good progress. The Forth was pretty grey but we could see how the river was beginning to widen out after the narrowness of the stretch between South and North Queensferry. On the way, we passed St Bridget's Kirk just on the outskirts of Dalgety Bay. This is a 12th century ruin but is kept to a pretty good standard by Historic Scotland despite the public being able to access it without charge. On a nice day we would have had a picnic here, but onward we did wend, heading away from the coast for the next stretch.When next we had a particularly good view of the Forth,we noted that a helicopter had landed on Inchcolm Island and wondered if perhaps someone had fallen or taken ill while visiting the Abbey. Again this is a lovely spot to visit in summer months with a picnic. Ferries run from S Queensferry regularly allowing people to spend an hour or two on the island soaking up the history and beauty of the medieval monastic buildings, the seals and birdlife and interesting coastal defences from WW2. Now walking on tarmac we had Aberdour golf course on our right. The group was well spread out today as it turned out that one poor soul at the back had developed blisters! The first to arrive in Aberdour made a beeline for the Woodside Hotel and prepared them for a dozen soaking wet, tired, hungry and now blistered walkers to descend on them expecting coffee and scones to be served. We were not disappointed. We had a lovely cuppa and nice scones/ cakes although a little pricey. But we were made very welcome so that helped. A short distance left to walk to Aberdour station which was absolutely beautiful with hanging baskets and bedding plants all out in bloom. The station is always so pretty it regularly gets a prize for being the best kept station. They even have a greenhouse there, bringing on plants for next season. I hope they know how much people admire and appreciate their efforts. It only took a few minutes till we were back in the Lang Toun all ready for a hearty tea. Fish suppers seemed to be a popular choice tonight.
Posted by Quilters at Work at 18:12 No comments:

Birnie and Gaddon Lochs and Collessie

We've been meaning to do this walk for a good long while but were glad we made it today - all will be revealed.
As we made our way by car to the parking area at Birnie, the sky was several colours of grey and I began to think of the Dulux paint chart which always has interesting names for the tones of colours, and I wondered what they would have chosen for today's predominant shade. Battleship perhaps.
Carrying on regardless, 14 of us met up and began a circular of Birnie Loch. It is quite a nice walk but there are so many young trees surrounding the loch now that you can really only see it clearly at one or two places where there are seats. And so we missed a lot of the bird life for which the loch is famous. This picture of bullrushes was taken a few years ago but we stood at the spot where the photo was taken. It's even prettier now. 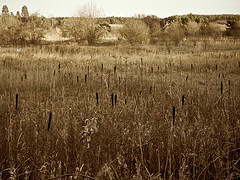 From the safety of the loch walk we made our way to the wee village of Collessie across the very busy A91. There were two new walkers today - Allan, Christine's cousin on holiday from Vancouver and Isabel whom we all know well. Approaching Collessie Isabel remarked on a wee window we could just see through the trees which she remembered from her childhood as this had been her grandparent's home and we said we would walk that way to get a better look. We passed the most picturesque cottages,especially Rose cottage, which is thatched and immaculately painted. We also passed a standing water tap in the street where Isabel remembers collecting water for her grandparents as they had no running water in their house. Further on we visited the church although it was closed today. Had we visited last week we could have seen inside as the church took part in Fife's Open Doors Day. Some of us like reading the gravestones though, so spent a wee while there and took some photos. 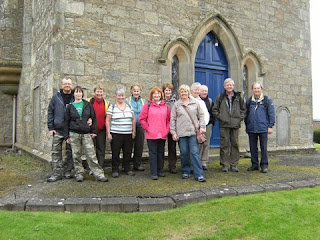 So it was here we followed Isabel to visit her roots. We saw the house, and as she was showing us where the dunny was, a lady in the adjoining house came out so I felt it necessary to explain why we were exploring her neighbour's property. We had noticed and admired a thatched stone building which we guessed would have been the village washhouse at some point. Now the lady I spoke to who remembered Isabel's family clearly, offered to show us inside the old washhouse as it is now her art studio. And what a revelation that was. Marianna Lines - www.stoneline.co.uk - is an artist in Celtic and pictish designs on wallhangings, canvas, screenprinta and greetings cards. She has copied traced and rubbed actual pictish patterns from ancient stones and reproduced them in colours made from natural dyes. We had a very quick tour of her studio but will pay a visit again when there are fewer of us. We were glad to have made her acquaintance and that Isabel shared her family history with us. Moving on, out of the village and back to the main road where we walked along the verge with great care, one walk leader at the front and one at the back wearing high viz jackets - very fetching.
We reached the safety of Gaddon Loch this time and still looking to see if we could identify some wild life. The website states the following are resident - Winter wildfowl, especially Wigeon and Goosander. Breeding Redshank, Lapwing and Oystercatcher, Maiden Pink.
Mammals include Otter, Bank Vole, Pipistrelle Bat and Red Squirrel

We just can't stop blethering long enough to seek these out but we noted there is a 'hide' which would offer those keen on birdlife some peace and quiet to wait and watch.
The words 'coffee'and 'scone' were being mumbled so we made our way to the Fife Animal Park for refreshments. They had been forewarned of our arrival and a long table had been set for us. Nice cuppa and goodies and quite inexpensive. And as expected, once our walk was over, the rain started.
So like Andy Pandy and Teddy when they closed the lid of the basket, it was ' Time to go Home.' If you are singing this, I know your age.
Posted by Quilters at Work at 00:50 No comments: