Fifteen walkers left the church on Sunday 28th September for Balbirnie Park, we parked our cars at the hotel car park, it was busy because of a Wedding Fair.


We set off down the drive and our first stop was at the walled garden allotments,it was great to see all the wonderful produce and flowers and we even got some tips on growing and cooking veg from the allotmenteers.


On through the park and into Markinch and a stop at the church for a photo, then up the road to the east lodge entrance. Back in the park we had a good tour around the gardens and the woodland walks,having a look at the wild life pond  and taking a few wrong turns along the way! The weather  was just perfect as we waked along the bridle path to the north lodge, past the golf course arriving at the club house where we were having tea. As we had some time to spare us ladies just had to go and visit the wedding fair,leaving Joe, Charlie and Bob to check out the golf results.


Back to the club house to have tea and cake and a good chance to agree on a super walk,with great company and perfect weather. Finishing with our walkers prayer.

Posted by Quilters at Work at 12:35 No comments: 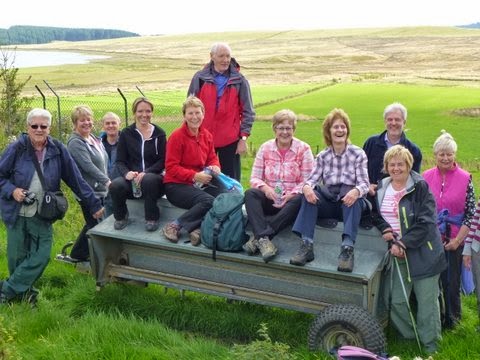 Rona wrote......
The Water of Life route in the Lomond Hills Regional Park saw 13 walkers setting off on Sunday
It was a lovely day, some cloud and a gentle breeze as we parked the cars at the Holl Reservoir.Starting off with one of Mary's sookie sweeties we had a gentle start on a Tarmac road which took us around the north end of Holl Reservoir, through a kissing gate to start a gentle ascent on farm tracks which were mainly dry underfoot. Passing Drumain Reservoir on our right we headed through open grassland with grazing sheep towards a tree belt which once through led us to a fertile strip between Ballo and Harperlees Reservoirs. Crossing between the two waters gave us fabulous views of the West Lomond and we were just thankful that we weren't going to climb it. A gentle ascent from the reservoirs led us onto a firmer track with fenced fields taking care to stay on the track and not going near the territory which stated "danger bull in field". A brief stop was had at a lovely old ruin and this necessitated a photo call as the open views were just amazing.Discussion took place as to the origins of the ruin.
Striding onwards we exited the track on the south side of Craigmead car park and heading in this direction on the road we eventually took a track through a field to our left. This was rougher walking and walking poles were a boon here with Kelly taking the lead and shooing the sheep out of our way. Walking for a bit by the shore of Ballo Reservoir we again had a steep rise but stopped to say hello to two ponies, a Jack Russell terrier, billy and nanny goats and a field of cows. Who says we never see any wild life! They looked pretty wild to us.
Our final descent took us past the water treatment works which purifies our drinking water and a return road to our parked cars where we said our Walkers Prayer. "May the road rise to meet you " was very apt today.
The Fife Coast and Countryside Trust describe the following "From Buckhaven to Burntisland we drink the water of the Lomond Hills. Holl reservoir contains enough water for about 8 Billion (8,000,000,000) cups of tea". Now think of that walkers! Well stopping at Fettykil Fox for refreshments there's now a lot less water in the reservoirs 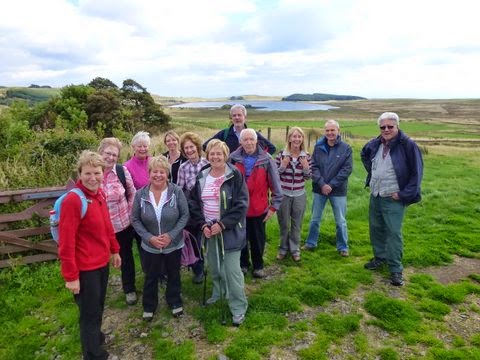 Posted by Quilters at Work at 13:48 No comments: