We ventured out of Fife this time for a wee change travelling by minibus to the Crook of Devon, Kinross. Not Perthshire.
The first half of the walk took us past County Fabrics, and Fossoway Primary School then off into the countryside. We smelled the woodsmoke and heard the sausages sizzling long before we reached the Scout camp. The tents looked mighty drookit after the rainfall they must have had last night. The Ochils were up ahead and we compared the view favourably with our own Lomonds. We crossed a new extremely sturdy bridge across the Devon. We reckon it will be there for a good fifty years. The path took us along the riverside but it was very boggy at parts and we did have to do a triple jump over one stretch. Into the forest there was a good path and this allowed our feet to dry off a little.  The next landmark was Lendrick Muir  which is currently owned and run by the Scripture Union.

This is a fabulous resource for young people with exciting outdoor activities, sports halls, meeting room s etc. Even old folk might love the fun here - maybe Bennochy's Trustees could go on a team building weekend? Moving on.....

Now according to the map taken from the internet, there ought to have been a bridge which would take us across the Devon again. Apparently though it was washed away a couple of years ago and not replaced. So we had a wee clamber through the woods at Rumbling Bridge Gorge which was really lovely. The gorge is quite spectacular especially the waterfalls after heavy rain.When we reached the actual Rumbling Bridge, or bridges as seen in the photo below, there was a two feet step which the diminutive among us required a fireman's lift to surmount, before we could walk across to the other side. 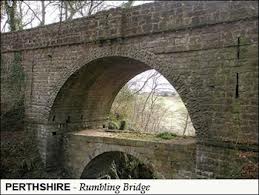 Now on the south of the river we headed back to the village of Crook of Devon where the innkeeper was waiting for us with hot drinks and biscuits. And once refreshed we took a brisk walk,as it was raining by then, along the High Street back to the minibus. Fifteen walkers today - every one a trouper.

Posted by Quilters at Work at 23:56 No comments: