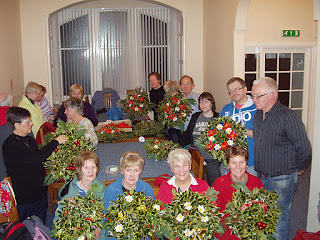 MORE PIX TO FOLLOW
Not a lot of people would have chosen Thornton to have their Christmas Day out. And on this date, mid December, it could have been snow or terrific winds, both of which Fife suffered earlier in the week. But as always, Bennochy Walkers were blessed with perfect walking weather - dry and cool. 17 of us took to cars as far as ASDA where we parked up and then walked on to Thornton. The path was good as far as the M90 which we crossed via the bridge, stopping in the middle to watch the speed of cars and count the red ones! One red one tooted at us and the passengers waved. Quaint customs die hard. There was a parting of the ways over the bridge as 2 members decided to wade through the mud via the country walk, while the rest - the sensible ones - took the main road from Kirkcaldy to Thornton, though it wasn't at all busy with traffic today. We stopped to steal some holly from a tree, but then there is no way 15 people can steal furtively. So when we arrived at the venue almost all held a sprig of holly. The venue was the building fondly still called 'the Crown' - the old Crown Hotel. The owner, Mike Catignani,who conducts his business Solutions Developed from this building, had kindly allowed our group to use 'the Crown' for our activities and he greeted us warmly with tea/coffee and biscuits for all. 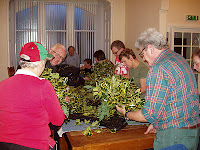 The activity we chose was wreath-making and had asked along local man George Wallace, an expert in this department, to help us to put something together which we could call a wreath. 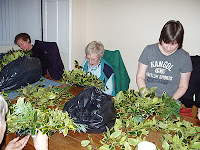 Little did we expect the preparations which George had made before he came. He had two black bags filled with holly, every single piece wired by hand last night while he watched the TV!( We felt a wee bit daft having nicked one sprig each!) He had also made the moss rings for us and brought along a variety of decorations for us to dress the wreaths. How could we go wrong? We didnt. With George's help we all made beautiful wreaths as you can see in the picture and we were delighted with our efforts. Just to make the day perfect we had fish suppers delivered by DOM's and more tea and coffee served by Mike. An old Bing Crosby CD playing in the background and ginger wine to warm the cockles. Picture the scene.....
Relatives transported us from Thornton back to Kdy and we were feeling very Christmassy and content.
So it wasn't a bad idea then to go to Thornton for our Christmas do. Grateful thanks to Mike and George for making this happy day possible.
Wishing all our followers a warm, peaceful Advent and may the wonder of the Christmas miracle bring special love and happiness to you and your families. 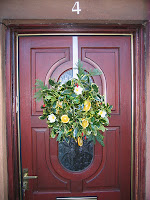 PS And here is one I made earlier in situ
Posted by Quilters at Work at 03:52 No comments: