Most of us chose to take the train along to Kinghorn as we can travel very cheaply when we flash our MyFife cards. We didn't expect many walkers as today's route was less than three miles, a mere stretch of the legs. However 17 of us turned up and we got off to a good start from Kinghorn station, crossed at the monument and headed for the golf course. It was quite amusing when we were crossing the road; the traffic stopped to allow us across in safety like little ducklings, schoolchildren or maybe the auld and bewildered.
As we passed the clubhouse, the path began to slope upwards a tad and so we stopped halfway to take in some air as well as the coastline from Fifeness at the most westerly point of Fife down to the Salisbury Crags protecting our capital city across the Forth. The Bass rock and Berwick Law were right there on the horizon, the May Island to the north and Inchkeith and Inchcolm to the south. You would simply never tire of this magnificent panorama.
At the top, we passed the Pettycur Caravan Park where many of the caravans at the highest point are residential, for obvious reasons. On past Gallowhill plantation and Grangehill House and a downward slope which we appreciated. It was a good surface to walk and the path wide enough for 3 abreast; conducive to good conversations being struck up. Coming towards the B923 with the Binn up there to our left, we chose to go right. We gathered for a photo shoot, those pictured here seemingly happy to be incarcerated. 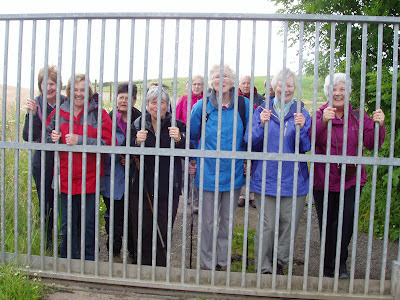 A very silly joke from childhood ran through my head,
There were two hedgehogs standing at the side of the road.
One turns to the other and says, "Shall we cross the road?"

The other one says, "No! Look what happened to the zebra!"
However, with Bob D on crossing patrol, thankfully we managed to safely traverse the very busy 'loch road' between Kinghorn and Burntisland.
Now the incline at the start of the walk had been intimated beforehand but here was another unexpected one, with chopped down trees and lots of glaur to negotiate around. We took it at a canny pace though, just enough to raise the heart rate a little, and emerged from the woods looking down on Craigencalt and Kinghorn Loch. Craigencalt Ecology Centre has become an educational centre for sustainable ecological projects and wildlife, as well as encouraging people of all backgrounds and abilities to come and volunteer in all of the conservation work that goes on. A great asset for Kinghorn and our environment.

The loch was a bit choppy today and so the ducks and geese, dozens of them, were on dry land and approached us menacingly when we were on their territory. We had to shout, "Christmas!" so that they would scarper long enough to let us get another photo taken. 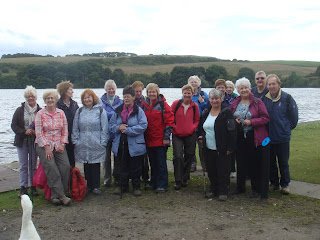 We didn't visit the Ecology Centre because there were too many of us to sneak in without paying. We walked along the road leading to Red Path Brae, or the 'kissing trees road' as known, but didn't go there as it is really too narrow and twisty to be safe for 17 walkers. So back to civilisation again via Kilcruik Road and we admired all the lovely big houses there, one of which is on sale right now for a mere half mill. Into Townhead we passed many 18th and 19th century houses which are being kept in good order by their owners. Further downhill we move further back in time in North Overgate with a variety of very old buildings with a long history. Just then, the smirr made an appearance which signalled time for refreshments. We discovered it is not easy to get a cuppa in Kinghorn at 3pm, however the Carousel obliged and we had time to rest and debrief before getting the train back to the Lang Toun.  Another good one notched up.

Posted by Quilters at Work at 02:41 No comments: