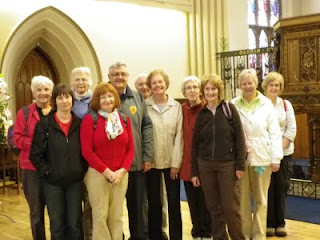 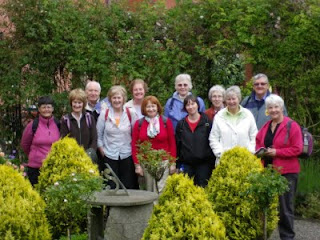 On Pentecost Sunday we decided to venture to the ancient capital of Scotland ---- no, not Edinburgh or Stirling --- but Dunfermline! Three carloads travelled along to Pittencrieff car park, abandoned our cars and set off through the ‘Glen’ down to the lower gate. Our first stop was at the Andrew Carnegie birthplace museum --- which has recently been renovated and expanded and this was a very interesting visit. We learned a lot about the world’s richest man and greatest philanthropist. Apart from having access to the wee upstairs room where the whole Carnegie family lived (fascinating) we also learned about many other families and companies from elsewhere in Britain and overseas who have given away billions of pounds to the needy (eg the families Rowntree, Cadbury, Heinz and many more).

Then we moved on, up to the ancient Abbey buildings, through the Pends , past the old Royal Palace and into the Abbey Kirk. We were met by Anne Toshack who told us about the history of the Abbey site from the time of King David 1st (and before) – the story about his parents King Malcolm and Queen Margaret (and her sanctification) –then through the Reformation --- right up to the early nineteenth century when the present Abbey Kirk was constructed. We wandered around the Kirk and looked through to the Nave of the ancient Abbey --- built by the same masons who built Durham Cathedral. Of course, we heard the story of King Robert the Bruce and saw the beautiful marble and brass memorial plaque on top of his grave, which lies directly below the Pulpit. 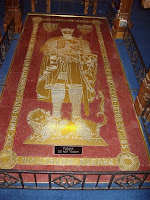 We moved on to the Abbot House for our customary coffee and cake stop---- braw!

Finally, we walked back through the Glen to our starting point.

It was a good visit, and the weather was kind to us!
Posted by Quilters at Work at 22:32 No comments: