British Summer Time officially ended during last night, but there was a bonus of an extra hour snuggling up in bed this morning. So when we left church a little later at 1.05 and travelling further afield than usual, we had to keep in mind that darkness would fall swiftly at the other end. 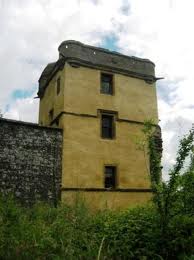 We parked at the village hall at Letham and proceeded on a gentle incline up 'the Row' where the entire street of houses were all attached and all on the same side. We passed the Old Post Office, now a house, and Letham primary school right at the top of the hill. At that point we tucked our trousers into our socks, heeding the warning that this walk would be glaury. We walked towards Nisbetfield Farm, then a dogleg turn took us between fields back to Monimail Road. A little way along this road we came on Monimail church, a handsome building in well kept condition. Just beyond there we turned off to the right where we came across a perfectly peaceful little cemetery where one of our members stopped to remember her grandparents. We moved on, avoiding the muddy parts where possible, and enjoying the lovely countryside views and smells. At a crossroads, there was some debate about which way to turn. The practice walk had taken two of our members through a forest where the trees had been felled so required a level of fitness to negotiate, straddle and hurdle over. Not wishing to lead the group on this assault course we chose to take the safe route pointing back to Monimail. We had planned a visit to the Monimail Tower Project (scottish charity sco 01481) and surrounding grounds and orchard, the upkeep of which is undertaken by volunteers, trustees of the charity and people who simply choose to live there and live off the land and the forest. 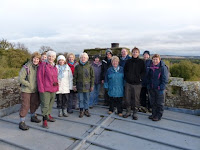 We were met by Sam who was new to the project having only lived there since August. Currently there are only three people living at the community house but there is room for eight  plus accommodation for volunteers who come for a few days at a time. The community was working in the allotments when we arrived turning over the ground ready for onions to be planted. Sam took us to the Tower and we stood on the roof from where we had a 360° view of the walled gardens and the orchard all dating back to 15th century. Clearly, there is far too much work here for a few volunteers but it is good that their work is able to preserve the lime-washed Tower as well as provide an alternative lifestyle to those who choose. Occasionally there are open days when traditional woodcrafts and skills are on display. We saw an example of willow weaving which was really beautiful. 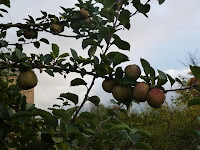 The orchard produces apples, pears, greengages and berries all used by those who live there and used to make jams etc to sell and barter. The apples proved irresistible to some of our group who shall remain nameless.    The latrine was a source of amusement, though very civilised with convenience of a candle, bowl and pitcher and floral display.
﻿ 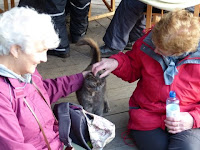 Sam very kindly made a cup of tea for us and we all sat in the 'sitooterie' to have some refreshments and pet Obi the community cat.The group gave a donation to the project and after a shot in the hammock, we left before the sun went down. 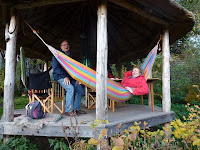 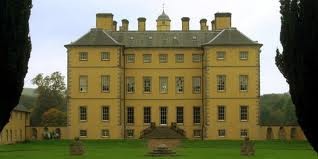 Unfortunately we did mean to see Melville House, a magnificent stately home just through the trees from the MTP but as the sign on the gate dissuaded us from entering, only a couple of us went to have a closer look. From the 1960s to 1990s the building was a school for boys who did not cope with meanstream education. Isobel recalled her first job there as a cook when she was only 17.
Making haste now, we only had a mile to walk to take us back into the lovely wee hamlet of Letham. No shops, no pubs. But there is a nice playpark there for children. We all agreed that we had been fortunate once more to have had good weather, blue skies actually, and as always good company with new friendships formed and old ones cemented.
Posted by Quilters at Work at 08:36 No comments: 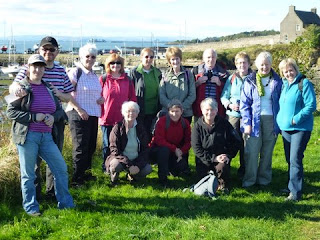 What a wonderful day this has been. 14 walkers arrived at Limekilns parking up just beyond the marina. Right away I heard comments about Goliath, the mammoth crane which is sited at Rosyth Dockyard and which dominates the skyline. It was unusual seeing the bridges from the other side too; we nearly always view them from the east side with the Forth Bridge in the foreground. The Forth was like a reservoir today with hardly a ripple between us and Blackness Castle on the other side. 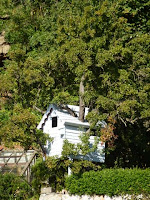 The walk along the promenade was just glorious and there was a real good feeling of wellbeing as we chatted, laughed, caught up with friends. We noted this treehouse and thought what a great ganghut it would be for the children of that family. There was a wee quiet buzz around the Ship Inn, painted black and white with typical maritime décor, which had folk sitting outside with their beers enjoying the sunshine and the peaceful views of the Pentlands. Other than that, there was silence. 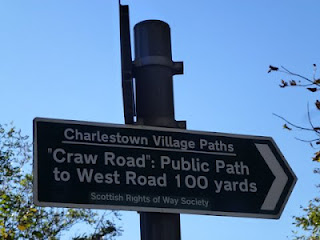 Charleston is really just an extension of Limekilns, but has its own harbour with wee boats basking in the sunshine today. We passed the old limekilns which are derelict now and from there also saw Ironmill Bay and Crombie Pier where the Royal Navy stores it’s armaments. We found a short cut taking us from the shore up to a higher level where we landed on the Craw Road. I’ve always done my best to avoid going down the Craw Road but here is proof we were all there today. From there we emerged onto West Road which had a fair amount of traffic for a country road. Along this stretch, conversations overheard ranged from the hedgerows heavy with wild berries, hips and haws and their health properties, to when would be a good time to change wardrobes from summer to winter clothing. We turned off the road at a farm which signalled that we were on the second half of our walk already. This road brought us out at the old granary at Charleston and we commented on the wee Post Office which served as a Johnny a’thing in the village. Nearby is The Scottish Lime Centre which promotes and educates in the traditional skills required for the conservation, repair and maintenance of historic buildings. We were enthralled at the long rows of wee cottages and the peace and quiet and cleanliness of this village. We nipped down a passageway between houses and  came out at the village green where children were having fun at the swingpark in safety. From there we could see the venue for our refreshments, The Elgin Hotel. On approaching the hotel, whilst appreciating the design and architecture of the building above her, poor Mary had a tumble. Thankfully, not badly injured, but she’ll have to lay off the modelling for a while till these skint knees heal over. The hotel was ready for us with 14 places set with lovely scones and a good cup of tea. Great service from the young waitress with free top up of tea and coffee. Full marks Elgin Hotel. 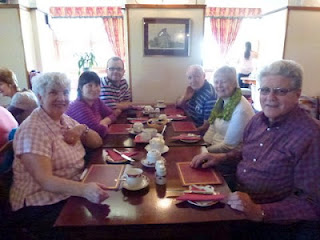 We will share the good service with others and patronise ourselves in future. Once refreshed, we were off at the toot as I had misjudged the time.  I had hoped to be able to pop into The Kilns, a wee gift shop in Limekilns before they closed at 4.00pm, and we just made it with minutes to spare. It was welcomed by the owners I think, and appreciated by our ladies who are somehow drawn to shops like these. A good few purchases were made. We took time to admire the pretty brightly painted little houses with cyclamen in hanging baskets, the sundial on the wall of the newly opened sundial café and ongoing renovation of old property. These little villages which seem to be tucked away from civilisation are very much alive. The summer Gala website demonstrates their community spirit.


We wandered back to our cars in a most contented manner having had the best of the day and the best of company.
Posted by Quilters at Work at 03:22 No comments: