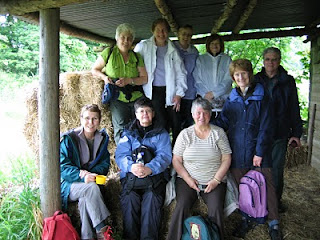 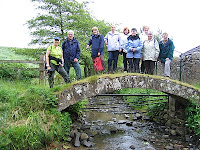 Oh my dogs are barking tonight!
We started off at the carpark at Ceres following part of a Hamish Brown walk. So the very first part was a wee climb up locally named Waterless Road which got the heart rate up. Rona remarked on the large stones under the grass we were walking on and hey, when we read Hamish's book (good old Hamish) he tells us that this used to be the main road from St Andrews to the Pettycur-Edinburgh ferry circa 1680. We passed beautiful wild flowers on this road; and the most gorgeous, enormous pink poppies you ever did see. We sheltered from the precipitation at Denhead farm to let the slow-coaches catch up, then downwards towards the B939 Ceres to Craigrothie road. Straight across that road we found ourselves in a narrow, glaury track which brought us out at a 17th century lectern doocot. We were passing a house/ farm and disused Corn Mill when 3 muckle (well one was muckle) dogs came barking and bounding out towards us, alarming one or two of us, I have to say. The wee photo above was taken on a packhorse bridge which formed a ford over Craigrothie burn. I think the photographer must have been standing in the burn to get that one. Moving on, we came across a wee wooden barn at Wemyss Hall Mains Farm and took shelter from the drizzle a while, then decided to have our picnic sitting on the bales of hay. That'll be the Hillbillies in the big photo above. Fed and watered, and scratching a bit, we were off again climbing another hilly stretch then on to the main road where we came across the entrance to Hill of Tarvit Mansion. We stood some time there actually,feeling sad that the house is no longer open to the public. Several of us recalled happy times there and the beauty of the grounds, the building inside and out and the treasures within. It was just too expensive for the National Trust for Scotland to keep open. HOWEVER, I have just read on the 'net that NTS will in fact open it up for a few dates over the summer so I for one will definitely pay a visit. Keeping up the momentum we walked along the main road then a detour to Whitehill farm having to climb another hill to get there. That wouldn't be the last challenge of the day. Now Hamish's book states that we should walk along the edge of a field, but he didn't say the gate would be locked and we'd have to loup it! Well some of us found negotiating this obstacle a little testing, but we didn't leave anyone behind so through the field we all traipsed getting our trousers soaked up to our thighs in the long grass in the process. Once out of the field though we began to sense civilisation once more and soon arived at Moor Road, Ceres. From there we walked through the village having a rare time nosing in everybody's gardens snatching ideas for our own. We couldn't have left the village without a visit to Griselda Hill, of course. And there she was in the shop actually painting two cats in the honey bee pattern while we were there. We didn't purchase, but chose our next birthday presents we would like from our families. And a wee wander along the road brought us back to where we started. 3.68 miles according to the pedometer; not a great distance but enough to make my plates of meat cry for mercy. Thanks to friends Lorraine, Hilda, Rona, Winnie, Irene, Grace, Mary, Joe, Janis and Dianne for sharing another lovely experience in the airts and pairts o' Fife.
Posted by Quilters at Work at 10:32 No comments: