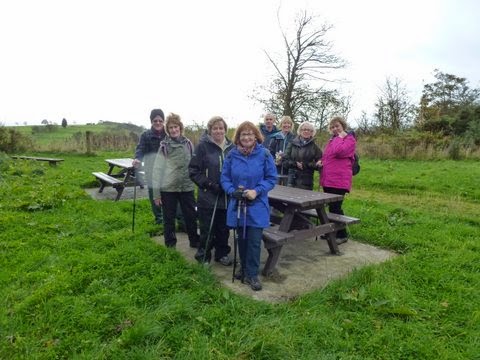 Janet wrote -
On a very windy morning nine walkers left by car for Kinghorn where we parked next to the Carousel cafe and gift shop.  We walked up to the War Memorial, crossed the High Street, into Baliol Street and up passed the school.   From there we turned towards and onto Kinghorn Golf Course which was, thankfully, empty of golfers so we suffered no bumps on the head or shouts of 'Fore'.


From the Club House it was a steady but steep uphill track that took us passed the caravan park on one side and the golf course on the other.   We passed Grangehill House, walked around the farm and when we reached the main road at Gallowhill we passed through a gate (held open by for us by a gentleman), crossed the road and went through another fence onto Binnend Path.   By this time some of us were peching a wee bit and the wind was certainly getting stronger.


Up the path we went and we reached a rest area (see photo) where we enjoyed a wonderful view over the Firth of Forth and a few sweeties from Mary's seemingly bottomless supply.   There were also visitor boards explaining what we would see and also giving information about who lived in Binn Village, why it came into being and we marveled at the fact that shale was mined so long ago, was discontinued and is now being talked about today.


We walked on and then when we were near the old ruins of the village we turned left down a steep narrow path to take us to Burntisland.   Here we found evidence of how strong the wind had been during the night as one of the trees had been broken and was hanging over the path.   We squeezed around it and continued downhill and then a ferocious sounding dog appeared with its owner; so 'ferocious' that it let us pet it as we passed!


Down passed the Golf Club and left behind the flats and into wood edge until we met Kirkbank Road.   Some of us felt they just had to have a wee look at a old and rather grand house.   There were many ideas of what it might have been and what it might be now but.....?  Anyway, we turned left down Greenmount Road South and when we met the main road across from Sands Hotel we had to make a decision.   Should we continue back along the main or cross over, down to the beach and walk along to Pettycur?   For the most of us it was no contest but three brave and sturdy walkers went off to check whether they could make it along the beach.   Alas the tide was too far in so they followed us along the main road back to Kinghorn, and, even with the deviation to the beach, they made it back as quickly as the rest of the group.


Then it was into Carousel where we had our usual tea/coffee, scone and a good old blether and then after a short prayer we all headed home.


We'd had no rain, lots of strong winds to blow the cobwebs away, steep inclines and declines to test our legs, lovely views and plenty of chat.


It had been another good day with good company!
Posted by Quilters at Work at 02:37 No comments: 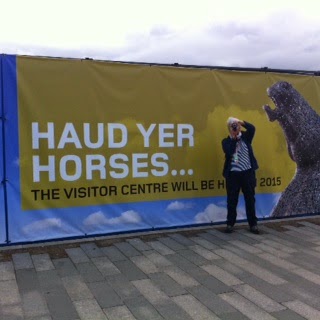 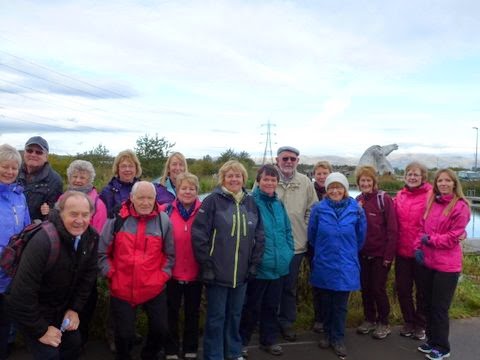 We departed from the church at 1000 precisely in  Viewforth HS 's luxurious minibus heading for Falkirk to visit The Kelpies. A cloudy morning with a decidedly autumnal twist, we were dressed rather differently to the last time we met. It was an easy journey through, the driver having googled the whole journey the previous night. Again, right on time, we arrived at our parking spot at Falkirk football stadium where some if us felt the need to use the facilities before moving on to meet our tour guide, Steve. 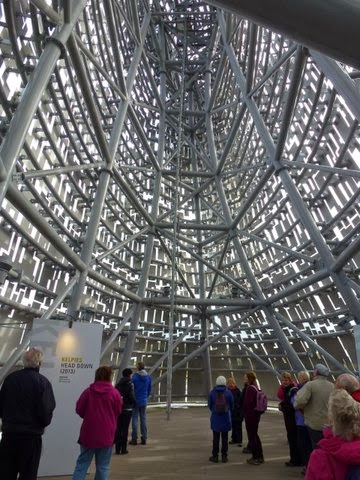 Mary bought a postcard at the ticket office so I bet George D reads it out at church on Sunday. The Helix park is very exposed so it was bitterly cauld during our tour and we shared hats, gloves and scarves around. We walked about 15 mins before even reaching the Kelpies. They are magnificent. These were sculptor Andy Scott's vision 8 years ago and he must feel completely satisfied at the wonderful result. 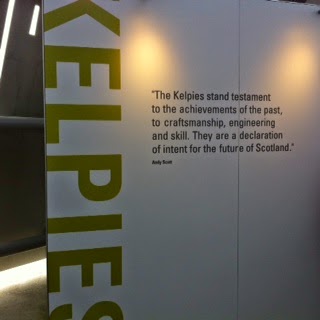 The surrounding plaza,  Lagoon , Playground,  wetlands, cycle paths and lots more make this a tourist attraction not to be missed for Scots folk and a real pull to the central belt for visitors to our country. I expect it will be even better once the tourist centre opens in 2015. So many people of all ages and nationalities were having a great time. Steve told us the history of the Kelpies and took us inside Duke, the head down horse, it's neighbour being called Baron, named after two life models chosen by Andy Scott for the character of their faces. Two massive Clydesdales - a testament to the industrial past if the Falkirk area.  Made from stainless steel plates - each one different- the contours of the horses' faces clearly visible.

The tour lasted 45 mins then we had to walk back to the Falkirk stadium for lunch. Very nice it was too, and some say they will return with their families. Unfortunately we had to return by the same route after lunch to go on our walk, so past the Kelpies this time and into the community woodland, trying to follow a map which was neither use nor ornament. Seeking two pieces of community sculpture in the woods, we did find one.  Charlie offering himself as the sacrifice as you see. This was a human sun clock but as it was very cloudy we couldn't really check out the time. 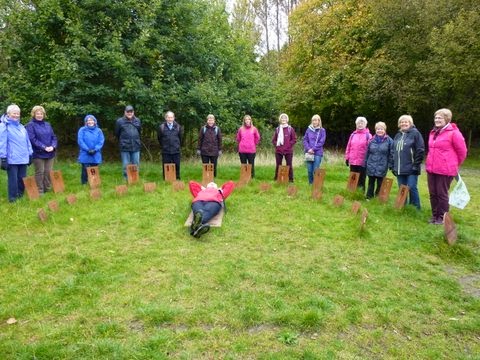 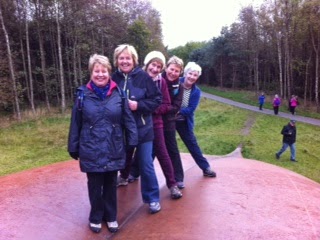 We got A little bit lost trying to  find the other sculpture until a kind man out for a daunder showed us the way to 'love and kisses'.
Massive lips made from corten steel. As you see the children in our party used it as a plaything. 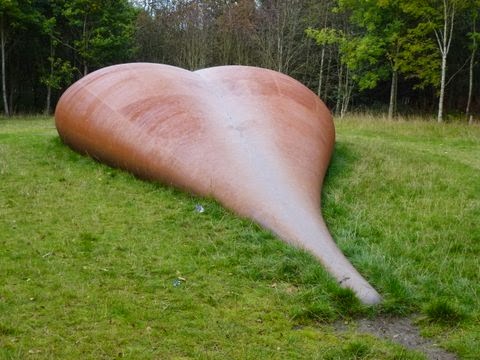 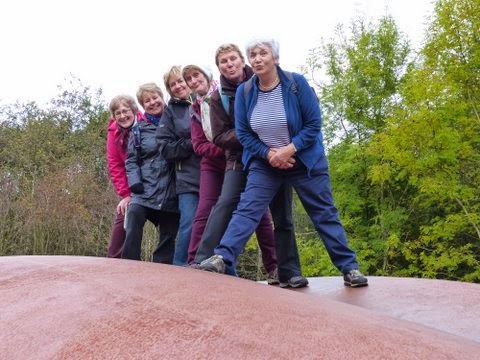 Back on the bus we shared our admiration of the Kelpies and the whole Helix Park. A quiz  was handed round with a valuable prize at stake for the winners. Alison and John were the winners which was nice as they were the 'new walkers' today. We then played a variation of pass the parcel - Pass the Pawkie - which June won, then shared her prize out with  the rest of the bus. The average age in the bus by the way, was 65.
We had an east journey home and arrived back at the church just after 5pm ending our meeting as always with prayer
Posted by Quilters at Work at 01:10 No comments: